A hand to hold, a hand to work, a hand to create and a hand to be independent: Meet Prashant Gade who has been providing prosthetic arms to the disabled 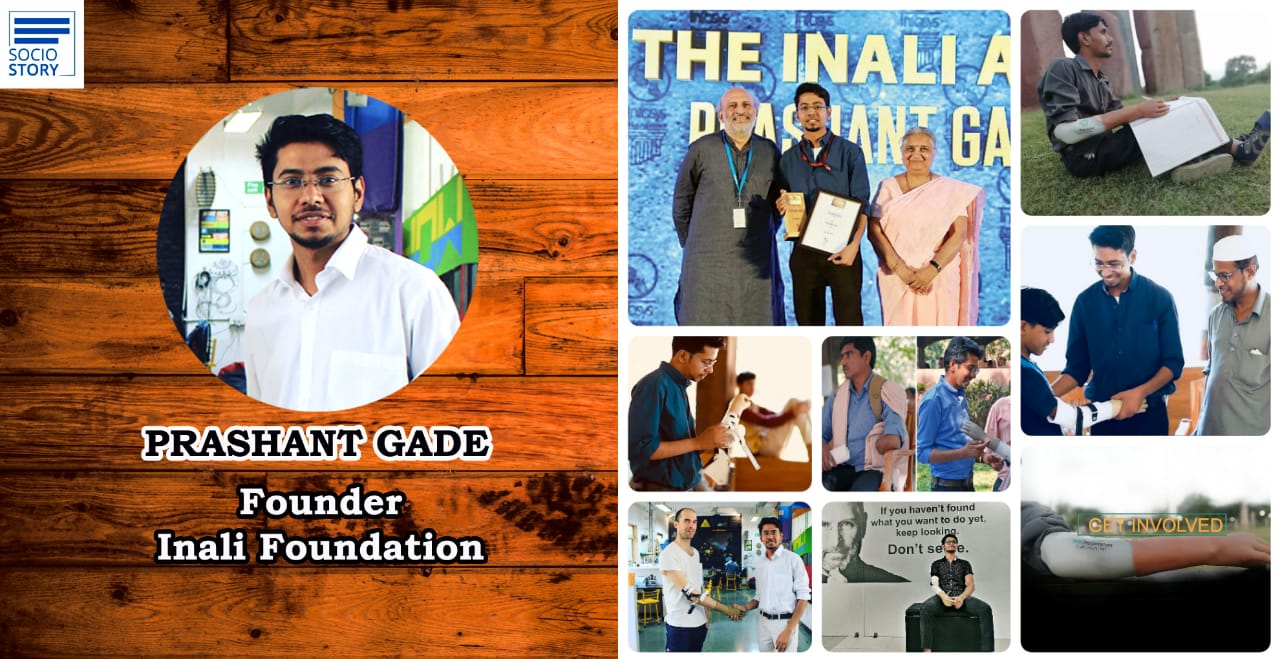 “Now, I can comb my daughter’s hair,” expressed Sita.

“I lost both my arms and was not able to go to school. After getting my arms, I was able to join school again,” expressed Durgesh.

“I was considered useless after I lost my arm. Getting an arm helped me in getting back to work and support my family again,” stated Suresh.

Well, these few testimonials throw light on the challenges faced by people who have lost their upper limbs. When they all lost hope, there was someone out there to cater to their needs and give them a new lease of life. Socio Story presents the story of a young talented boy named Prashant Gade who believes that people with disabilities are capable and powerful.

Although Gade had completed his engineering, he often used to get frustrated as he was not satisfied with what he was doing. He thought engineering would unleash his creativity, unfortunately it did not. He started teaching students in the University and had also started a Curiosity lab near his University. Since it was not a satisfying experience and in a quest for the purpose of life, Gade moved to Pune and joined an academy which encouraged hands-on learning experience.

As part of the training, Gade was searching for a project when he met a disabled man named Nicolas from France. On conversing with him, Gade learnt that Nicolas had made an arm for himself. So, an idea struck him and he thought to himself; ‘why not work on this project and create a few designs?’

When Gade started to work on the project, little did he know that his thought will lead in finding a purpose in life. In 2016, Gade got a chance to meet a seven-year-old girl living without arms. When he thought to help her out by gifting two prosthetic arms, some facts appalled him. On reaching the company which made prosthetic arms, he was quoted an amount of Rs 24 lakhs for two arms. This made him inquisitive and he started to give it a deeper thought.

Gade started to research and found that in every 10th minute, there is one amputation. Every year, more than 40,000 people lose their limbs and 85% of them are helpless and continue living their life without any solution. The reason was due to lack of affordable prosthetics and other required equipment. Gade felt that this is a serious problem which needs a solution and he believed technology has the power to solve this problem.

With an objective to support people with certain upper limb disabilities at free of cost, Gade started ‘Inali foundation’ in 2018. “Our aim was to provide affordable upper limbs to those who have lost them in an accident or don’t have them by birth. We also wanted to make devices which are technologically on par with other products that are available in the market internationally,” shared Gade who is 28-years-old now. Thus, Inali foundation was born out of the tremendous need to create and supply affordable upper limbs.

Gade whose interest lied in Robotics said, “The entire limb made by Inali foundation is manufactured and assembled in India. The battery-operated arm can lift up to 10 kgs of weight and can perform other simple tasks.” Gade who believes no one is disabled from his body but by his/her thoughts, added, “Even though with scientific and technological advancements, the affordability of healthcare services in developing and underdeveloped nations still remains a great cause of concern. For those who have lost their upper limb, they live with the stigma of being disabled. They struggle to do the smallest of work themselves and are perpetually dependent on others for help and assistance. They no longer remain independent or capable no matter how skilled they are. Of course, there are a few exceptions who have overcome their disability with great determination.”

In his concluding remarks, Gade said, “Following the guidelines by the Rehabilitation Council of India (RCI), we are planning to work on certain other projects for people with lower limb amputation, paralysis, wheelchairs and are trying to make them advanced but affordable. We are also trying to introduce individual finger movement, wrist and shoulder movement in the prosthetic arm.”