Ahead of World Suicide Prevention Day, Purvi shares her journey of losing a loved one to suicide 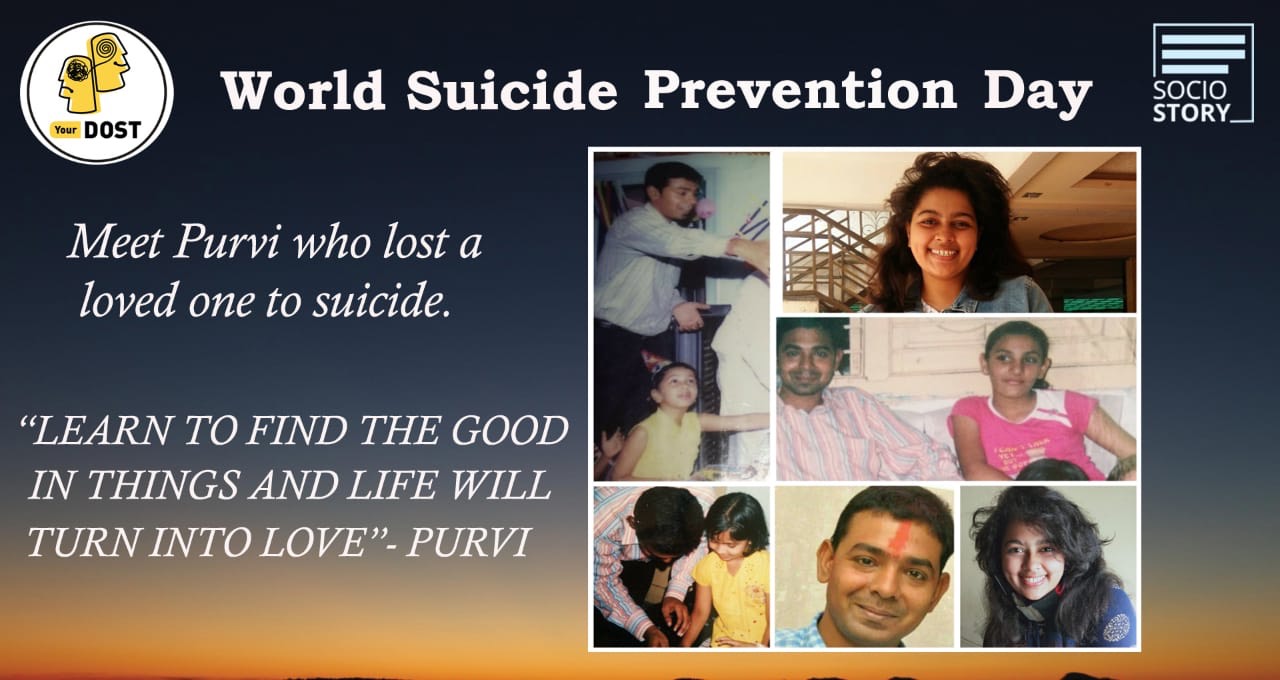 Every year, September 10 is observed as World Suicide Prevention Day (WSPD) in order to provide worldwide commitment and action to prevent suicides which is marked with various activities around the world. In support of this awareness day, Socio Story brings to you the story of Purvi, who shares her personal experience after she lost a loved one to suicide.

On July 16, 2015, exactly 13 days after his 12th wedding anniversary, Purvi lost her cousin brother Nikhil (name changed) to suicide. Purvi was just 15 years then and little did she know that terms like anxiety, depression and mental disorders existed. She was unaware that her cousin was struggling with his mental health and had attempted suicide several times.

When Purvi’s father broke the shocking news at 3 AM, she was speechless and was unable to feel any emotion for the next few days.

Nikhil was around 20 years elder to Purvi. “Nikhil was a very humble person and had a kind heart. I remember that he once gave away a pair of his shoes to a beggar on the street. His mother always said that a soul like him wouldn’t survive the wrath of this world. Unfortunately, we lost him,” recalls Purvi while sharing the story.

In 2007, Purvi’s father decided to move to Ahmedabad for work and she was elated because this meant that she would get to meet her cousin at least once a week. So, on Saturdays, Nikhil would pick up Purvi from school and take her home. As much as he loved Purvi, his wife wasn’t very fond of the relationship they shared.

In 2010, they had to move back to their hometown in Rajasthan and could only visit Ahmedabad once or twice a year. So, she did not get to meet her cousin brother as much as she would have liked.

Eventually, after his loss, a lot of things came to the fore regarding his marriage and mental state at the time. “On the other hand, I was in a lot of pain because I couldn’t save him and I blamed myself every day. That is when I started struggling with my own mental health. I didn’t even realise it because I was busy looking for answers and didn’t bother to take care of myself. One of those days, I ended up writing a poem and this became an outlet for me,” said Purvi.

“I could not sleep all night thinking about my cousin. Questions like why did he do it, why did he not share anything, crossed my mind many times. I had nightmares, I woke up crying for almost 18 days straight and then I broke. I had to do something about it as anxiety already made a place in me. I did not consider seeing a psychiatrist or a therapist back then because I couldn't express myself. I could not talk about it to my friends either so sharing it with a psychiatrist was going to be a big deal,” said 20-year-old Purvi.

She also added, “To overcome such thoughts, I started doing things I used to like - painting, writing, art and craft. I could finally see myself healing. I also realized that for me, getting tired physically is the way I can keep my mental health happy. I continued to go for my daily runs. And then I thought It's okay, this too shall pass. Wake up, follow your schedule and if you do it right, reward yourself. It really helps.”

“My brother always told me that if there's something that occupies/disturbs your mind, it's always worth fighting for. There were times when a few such thoughts crossed my mind, but my Mother always gave a ray of hope that life can be good,” shares Purvi adding that she has friends and parents who check on her regularly.

There are several things Nikhil’s absence has taught Purvi:

“I'm really happy for the new helpline number that has come up. It will be great if there could be a 3-digit helpline number just like we have 108 for ambulance. I might start working on this soon,” concluded Purvi.