“Being trapped in a female body felt like being in a cage”, says Transman Maani 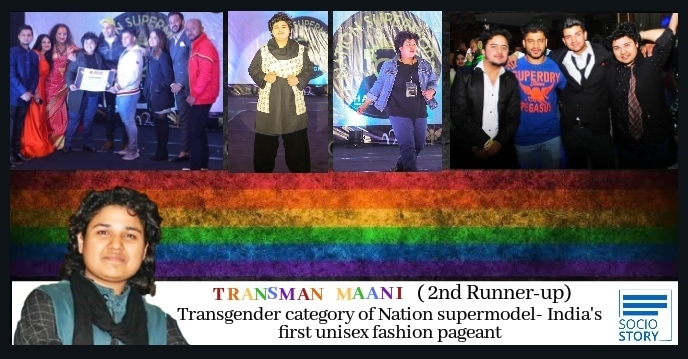 Reminiscing his school days, Maani Singh recalls on how frustrating it was to dress up like a girl, to stand in a girl’s row, to sit with a group of girls and to be called by a girl’s name. When family and friends called him ‘Manisha Singh’ (his certificate name), Maani would get provoked because he always felt that he was a boy trapped in a girl’s body. This means that Maani did not identify with the gender assigned at birth.

Be it going to school, a parlour, shopping mall, using the washroom or performing a show, Maani always felt the discrimination between girls/boys and had the fear of judgement. While people treated him as a girl (due to the biological sex), Maani had always considered himself to belong to the masculine gender since childhood. Due to lack of awareness and the stigma surrounding the LGBTQ community, no one understood what was Maani going through. From sexual harassments, domestic abuse, family and personal traumas to bullying, mental torture and attempting suicide, Maani’s journey has been a difficult one.

Although Maani was a brilliant and talented student, he could not score good results because of his anxiety levels and apprehensions. Adding to the woes, he had a disturbing childhood because of the domestic violence and abuse in the family which led to an unhealthy atmosphere. Although he spent sleepless nights, Maani could never gather the courage to explain his feelings to his family. The family always misunderstood him to be an adamant and arrogant child.

Maani always wanted to escape as he never felt comfortable in a girl’s costume. “I felt I am locked in a prison and I need to free myself”, expresses Maani who is now 29-years-old. However, none of them could understand his behaviour and why he feels this way. His teachers said that Maani was a brilliant and talented student, but did not know the reason for his underperformance. Since he did not perform well in academics in the school he was studying, Maani’s father had taken admission in a girl’s school when he reached grade six. This added to Maani’s frustration and to control his anxiety levels, he found solace in playing with the boys in the labour colony near his home. However, his parents did not accept him playing with those children. And then Maani satisfied himself by doing all the activities that a school boy would normally do. During his eleventh grade, Maani wanted to join the volleyball team just for the sake that he would get a chance to dress up in a men’s sportswear and feel like a free bird.

Although heartbroken, Maani who hails from Delhi grew up with grit and determination. With no access to internet, Maani hardly knew about the terms ‘transition’ and ‘transgender’. Life moved on by facing challenges and Maani went on to become a trained government primary teacher. He continued his further studies by pursuing Media studies with Jamia Millia Islamia. But due to bullying and harassment, he dropped out of college in final year. He always wanted to be a dancer but again because of discrimination, he dropped his career. He also worked hard to become a freelance journalist, but could not pursue it because of sexual harassment.

With a hope that his family will understand and accept the fact that transgender people also need to be recognised, Maani, after a lot of persuasion, took his family to watch a Bollywood movie titled ‘Ek Ladki ko dekha toh aisa laga’. The film tells the story of a closeted lesbian and her attempts to come out from a conservative and traditional family. His effort was in vain and there was no reaction from his family.

However, life took a turn when Maani met Aryan Pasha, India’s first transman bodybuilder and two other people from the transgender community. Maani found hope in their company as they treated him like a ‘man’ and he could relate to them. He was then encouraged to give his audition in a modelling contest in November 2019. Maani represented himself as a transman and was selected for the finals. He secured the 2nd runner-up position in Transman category of India's first unisex fashion pageant- Nation super model. A proud moment indeed!

Maani who started his hormone therapy a few months ago will soon undergo transformation through Sex reassignment surgery. “I consulted doctors, psychologists, counsellors and started my ‘Female to Male’ transition on my own as my family does not support except my siblings,” he says.

Being a victim of child abuse himself, Maani understands how traumatic it is to overcome the social stigma. Hence, he started working with a Delhi based NGO where he runs a campaign called ‘Aao baat karein’ to spread awareness on eradicating child sexual abuse, sex education and mensuration. He has reached out to more than 25,000 children and 2,000 teachers/parents across government schools, private schools, NGO's, shelter homes pan India.

When asked about a few of his experiences, Maani shares, “I have suffered from Urinary Tract Infection (UTI) multiple times because I had no access to public washrooms. There was always a fear of judgement as all public spaces are not transgender friendly. I was pushed from a moving train in Karnal just because I questioned a group of four people who were bullying me.”

“While pursuing my media studies, my father had expired. So, my younger brother and myself performed all the rituals during the cremation. Unfortunately, I was mocked at by my relatives,” added Maani who till today, never slept peacefully.

“Because of the trauma, I also resorted to chain smoking and drinking alcohol. I battled with depression for six years and went to an extent to attempt suicide at the age of 19.  However, God had different plans for me and I was given a new lease of life. My mother was hospitalised and that day I realised that it is my responsibility as the eldest child to support my family. I started looking for jobs on the internet and slowly started to financially support my family,” stated Maani who has participated in various awareness cycle rallies.

“Some men are born in their bodies while some have to fight for it”, said Maani adding that he wishes to open a cafe fully dedicated to the LGBTQ community and wants to visit village to village to spread awareness on gender and acceptance.