By engaging the male fraternity, Harish Sadani has played a pivotal role in transforming them from ‘bystanders’ to ‘out standers’ 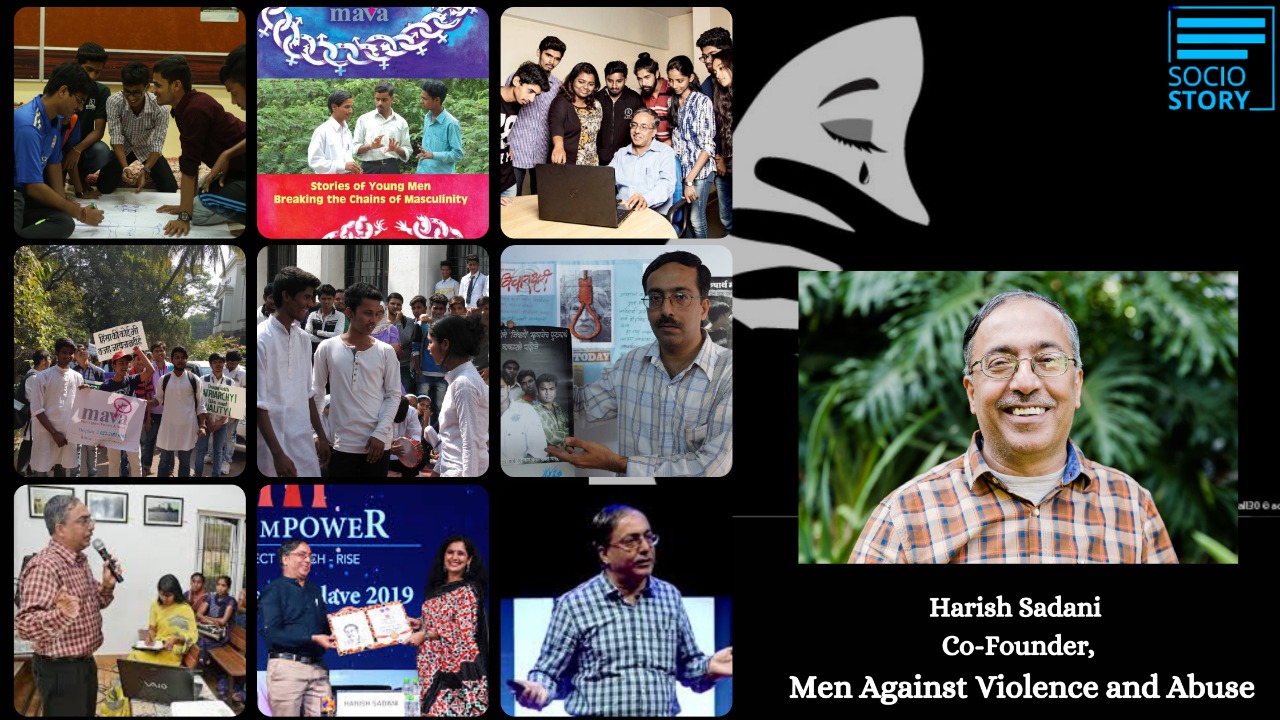 At an early age as a child, Harish Sadani had begun to question about gender roles. He often asked himself; ‘Why was I teased as being a 'sissy’ or ‘girlish’ when my friends and school-classmates found me doing chores at home with paternal aunts?’ “I remember, I felt bad and isolated then. I was wondering if it is okay if I am a growing-up man different from the men stereotyped in society. This and other questions on gender plagued me throughout my adolescence,” reminisced Sadani.

In his final year of undergraduate studies in college, Sadani was a great fan of late Smita Patil, an actress par excellence. Sadani used to see her films, alone, in theatre houses and was highly inspired by her portrayals of woman protagonist questioning and breaking the female stereotypes - whether it was the slum-dweller in ‘Chakra’, commercial sex worker in ‘Mandi’, social activist in ‘Subah’ or the psychologically unstable woman in ‘Arth’, she had stood out as a woman of substance.  “Often, I used to weep after seeing her performing roles of an ordinary woman, struggling to live a life of dignity,” shared Sadani.

One day, Sadani visited a book store near his home and bought a film magazine, wherein he saw her birthdate and home address published along with those of other actors. Sadani decided to wish her on her birthday and wrote a letter. To his pleasant surprise, he received a reply from Patil. Thereafter, he began to write to her regularly. She responded to his letters, where he analysed her cinema roles and she offered her own views in return.

Sadani was continuing his pen-friendship and while pursuing his higher studies, he continued watching a few of her films. On one occasion when he was watching her film ‘Nishant’, his attention got driven to the male character’s role in the film performed by the versatile actor Girish Karnad. He had played the role of a school teacher who is humble, sensitive and caring to his wife. Sadani wondered as to how his character was different from the typical men expected by society.

So, one day, Sadani decided to share these thoughts with Patil. In his letter, Sadani asked her why that male character was played down when he was so interesting. He further said, “I was eager to know her perspective but she just shrugged off my query by merely commenting that it is the director’s prerogative on how to portray the characters. And I felt a bit disappointed.”

“At one moment, as there was churning in my mind on that male character, I discovered that I could connect and relate to him to my ideas of what it means to be a ‘Man’. I felt that I was living that reel character and I was not alone in my journey,” expressed Sadani who believed in providing a platform to people where they are not judged or labelled for being the way they are and at the same time engage them to express their feelings.

His passion led to forming an organisation which has been engaging and mentoring thousands of adolescent boys and young men across India to communicate with peers on healthy relationships, masculinity, sexuality-related matters and redefine masculinity, using out-of-the-box methods.  Sadani is a leading gender rights activist who has pioneered efforts in India in 1993 as the co-founder and chief functionary of Men Against Violence and Abuse (MAVA), where he works with young men and boys to prevent violence on women.

Speaking to Socio Story, Sadani who believes in cultural advocacy, said, “Around 25 years ago, when MAVA decided to bring out a Diwali special magazine – by, for and of Men, it was historical. In the past 24 issues of Purush Spandana (meaning Men’s Expressions), we have had contributions from Men in different walks of life expressing their thoughts, ideas, experiences and insights on a wide range of gender issues. To shape the thoughts of people from diverse backgrounds, we also organise the ‘Samabhav film festival’ which spreads awareness on gender issues.”

MAVA has started, in September 2020, a new long-term, out-of-the box initiative called ‘Maanush’ in 3 states: Assam, Gujarat and Karnataka, wherein select young men are being intensely sensitized, trained and mentored on issues of gender and sexuality. They are also enabled to reach out and ignite thousands of young men in their neighbourhood and in the region.

“Maanush initiative captures our vision of freeing men from shackles of patriarchy and enabling them to be more humane,” said Sadani who was invited by national and international bodies like UN Women and UNFPA to share insights and build capacities of various stakeholders on addressing issues of gender-based violence against women.

Sadani is currently a Fellow with Aspen's (US) International New Voices program. In recognition of his pioneering and significant work, Sadani was awarded with the Ashoka Changemakers’ Award (US) 2010, Maharashtra Foundation Award 2011, the Muktaa Samman Award 2014 by IBN Lokmat news-channel of the CNN Group and the Sandvik India Diversity Award 2017 by Sandvik Asia Pvt. Ltd.

“To focus on the preventable factors and to bring about an attitudinal shift, we are working on a manual which would highlight guidelines/modules for boys and will stimulate in breaking down stereotypes. It is high time that 'Gender' is be considered as a broader and holistic concept. Our mission is to create a world which lives in harmony and accepts differences,” concluded Sadani.