Experiencing Climate Change at the Global Frontiers, Rituraj Phukan shares his life as an activist 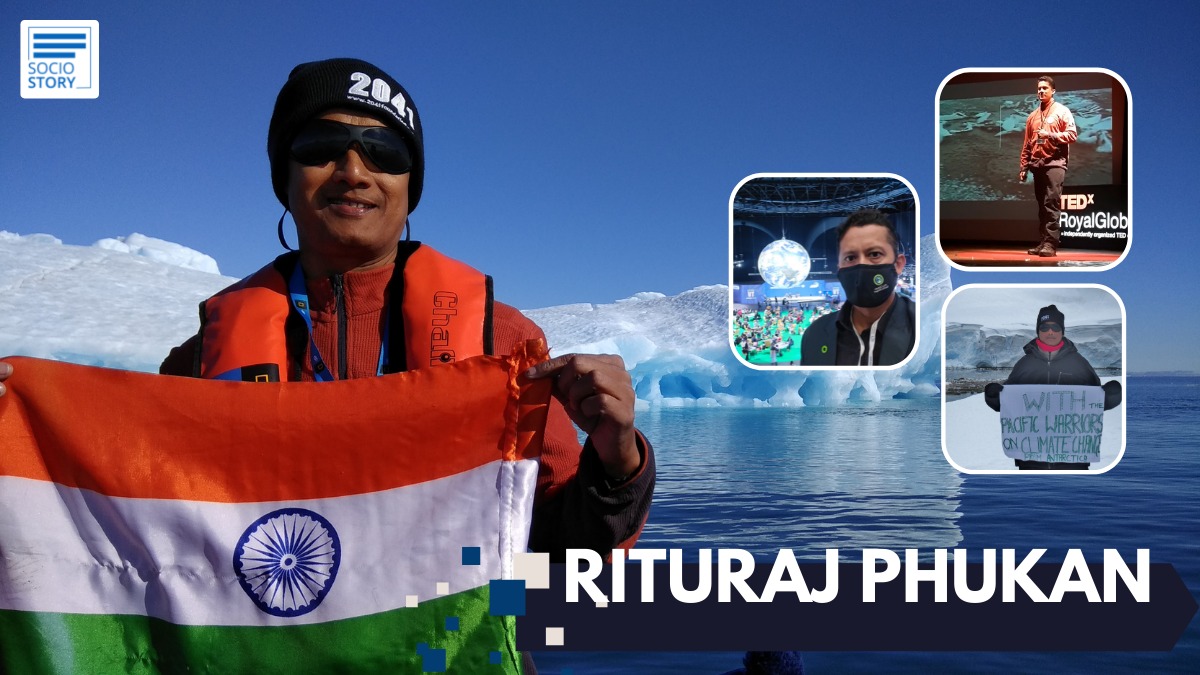 Rituraj Phukan grew up in a period of civil unrest with the massive students-led agitation against illegal infiltration of people disrupting years of school. His family was ostracized for their political leanings during those tumultuous days, and he grew up in an atmosphere of fear and frustration. He would spend months at home doing nothing and often wonder why people leave their own countries and cause trouble in other lands.

An environmental writer, TEDx Speaker, adventurer and naturalist based out of Assam, Rituraj has been fascinated by nature since childhood and remembers every moment in the wilderness as a magical trip of discovery. After nearly two decades of education and work life around the country, he returned to his hometown to begin a lifelong engagement with nature and he lives in Nagaon.

The documentary “An Inconvenient Truth” was an eye-opener for Rituraj as it answered questions that had lingered in his mind since childhood. He understood that everyday challenges faced by the people of Assam from flooding, erosion and conflicts were all connected to climate change. He was convinced that his native state was in fact, one of the early climate-change impacted regions of the world. Rituraj strongly felt the desire to do something about climate change as those days people were unaware or just did not understand the impending consequences.

Ten years back he was selected for an expedition to Antarctica and in 2013 he set out to gain first-hand experience of warming impacts on the fragile ecosystems of the remote continent. The sight of massive tabular icebergs from Larsen B ice shelf which had collapsed 11 years earlier was the push he needed. He realized the potential of sea-level rise from the melting of polar ice sheets, vulnerabilities of low-lying countries and took him back to the memories of conflicts from his childhood.

Rituraj started his journey as a climate activist from Antarctica. He sketched a slogan on the reverse side and held up the placard in solidarity with the 350.org Pacific Warriors Day of Action on the 2nd of March 2013. These were among the earliest global climate protests that took place on all the continents, and he was the only one from the Antarctic continent.

The International Antarctic Expedition led by polar explorer Robert Swan, the first person to have walked to both poles, was truly a life-changing experience and Rituraj was empowered to learn about solutions that people had demonstrated. The enigmatic expedition leader had set up an ‘E-base’ in 2008, becoming the only private person in the world to have a base in Antarctica. He set it up to prove that if such drastic changes can be made in the harshest conditions in the world, it can be done anywhere in the world. “Visiting the ‘E-base’ was a truly inspirational moment for me and I feel blessed to see the incredible work being accomplished there,” Rituraj says.

A few months later, he enrolled for the Climate Reality Corps Leadership Training at Istanbul and got trained as a Climate Reality Leader by former US Vice President Al Gore- who had won the Nobel Prize for “An Inconvenient Truth” in 2007- and some of the world’s leading climate scientists.

He has been a prolific communicator of the climate crisis and its solutions, delivering over 350 presentations till date to diverse audiences in India and abroad. “He was featured in the former US Vice-President’s 2017 book ‘An Inconvenient Sequel: Truth to Power’.

Seeking to understand climate change in the Arctic region, he participated in an Earth watch expedition ‘Climate Change at the Arctic’s Edge’ at the Churchill Northern Studies Centre in 2015. He experienced the impacts of permafrost melting on the train from Winnipeg and around the wetlands of Churchill. He participated in ongoing research of warming on the biodiversity of the region, documented the ecosystem impacts in a mesocosm and the International Tundra Experiment.

In 2019, he returned to the arctic as a member of the Climate Force Arctic Expedition that reunited him with Robert Swan and his son Barney, the founder of ClimateForce. Rituraj was able to experience the impacts of the climate change in the north polar regions, including the deaths of hundreds of Svalbard reindeer from starvation after unexpected rains froze into hard ice over the vegetation.

He then embarked on the Reindeer Rising Arctic Lapland Expedition, travelling over 4000 miles on public transport to engage with communities at the frontiers of climate change impacts in the region. His interest in the arctic ranges from the global weather impacts of sea ice loss, sea-level rise projections from the Greenland ice sheets and the predicted disruption of the monsoons.

As the Chief Operating Officer for Walk For Water and Secretary General of Green Guard Nature Organization, he facilitates awareness and action on the 3 W’s – Warming, Water and Wildlife- working with all stakeholders including indigenous communities, students, businesses, government agencies, civil society and media for a positive societal impact. Having worked in some of the most water scarce areas around India, he always says that, “Water is the local issue of global climate change, for people and for biodiversity.”

Earlier, he led the Walk For Water ‘Universal Safe Water Access’ campaign during 2016-17 to increase awareness and action on the water crisis. The campaign culminated with nationwide observance of World Water Day in thousands of campuses and locations around India and the ‘Water Pledge’ being administered in over a hundred countries.

Rituraj authored the chapter “Biodiversity in a warming world” in the Amazon No.1 Bestseller ‘‘Climate Abandoned: We’re on the Endangered Species List’’ a book launched in the USA on Earth Day 2019. He has been a prolific writer on the interconnected planetary crises of climate change, biodiversity, and water, regularly having op-eds and articles published in publications around the world.

Rituraj has been a TEDx Speaker and delivered presentations and talks in the UK, Malaysia, Norway, Sweden, Finland, South Africa and Bangladesh, and participated in deliberations in the USA, Canada, Mexico, Argentina, Denmark, Thailand and Turkey. Rituraj has been honored with awards and accolades including the Environment Excellence Award, Hero of the Environment Award, Eco Warrior, Green Yodha, Humanitarian Excellence Award, etc.

Rituraj is driven by concerns over glacial loss in the ‘water towers’ of Asia and is currently working on an initiative to mobilize civil society action in the countries of the Himalayan region and a collaborative initiative to test technological interventions for the loss of albedo and ice cover. Countries now need to rapidly decarbonize economic activities by businesses and drive investments in clean technologies, while ensuring climate and social justice. “National carbon pricing policies are needed everywhere to make polluters pay while delivering a carbon income for the citizenry, and address development aspirations and environmental concerns at the same time,” he says, talking about his vision for a sustainable future.

Rituraj says that the main reason for hope in his incredible climate journey is the emergence of youth leadership around the world. He was witness to the power of the youth during the two weeks of the UN and hw wishes to motivate the youngsters.

“Whether you are 17 or 70, it is time for collective action on the greatest collective threat that humanity has faced,” Rituraj said. He believes in making a personal commitment to solve the environmental crisis and is vegan for the planet. He also believes that a plant-based diet is key to mitigate the planetary crisis, feed the hungry and stop destruction of primary forests. “The planetary crises are global, but at the grassroots, most responses have to be made locally sustainable,” he says, referring to a question about conservation in everyday life.