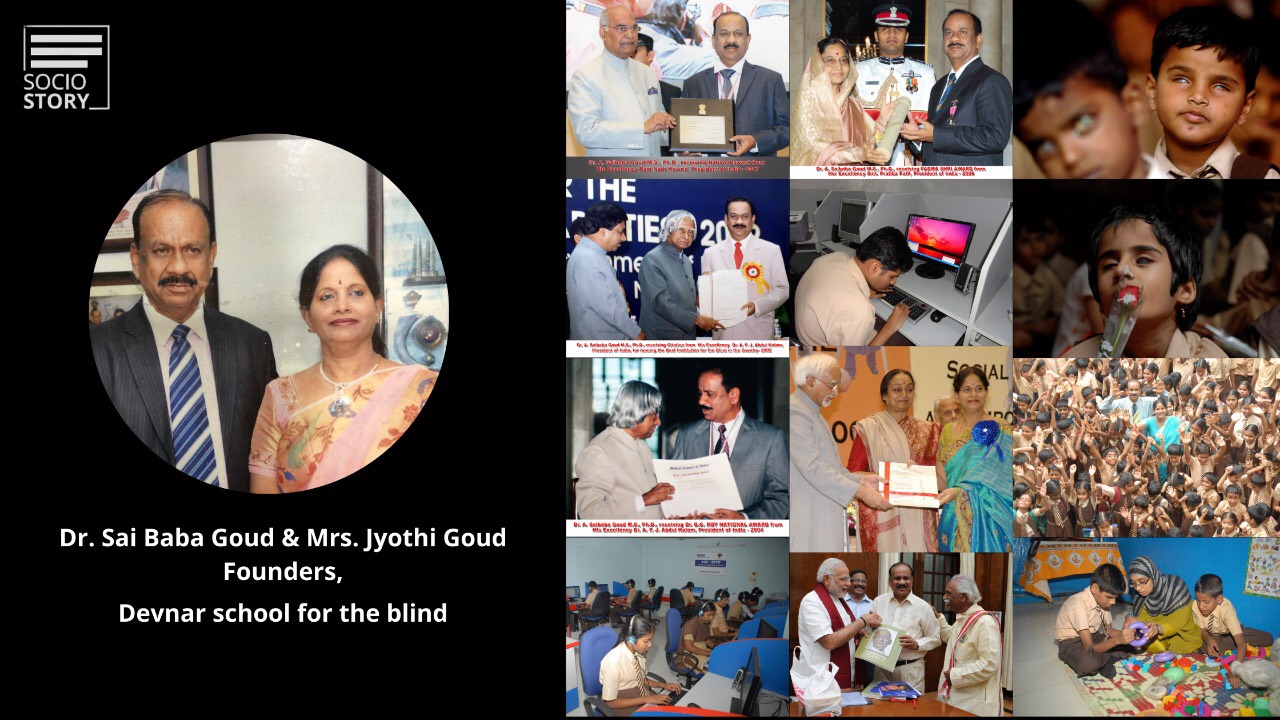 “Kindness is a language which the blind can see and the deaf can hear”, goes an adage. Devnar foundation for the blind believes in the same and has been rendering relentless service in education and rehabilitation of the visually challenged. From excelling in academics to sports, disability has not deterred the students of Devnar school to achieve great heights and make a mark in the world. Devnar School provides all that is necessary to bring out the best in the students. Their abilities outshine the disability to such an extent that the visitors leave the school humbled by the unconquerable spirit, perseverance and performance of the students.

Devnar School located in Hyderabad, was founded in 1991 by Padma Shri awardee Dr A Saibaba Goud, a leading Ophthalmologist of the country who was also the recipient of Dr B C Roy National award in 2004 for his outstanding services in the field of social medical relief. At the time of inception of the school, there were only 4 students and within a span of 28 years, Devnar School is acclaimed as the best institution for the visually challenged in India, with 500+ students aspiring to reach heights of achievement hitherto thought impossible for visually challenged children.

Dr Goud’s contribution to Indian politics has been very significant. A successful modification was made in the Electronic Voting Machine (EVM) by printing the names of candidates in Braille which enables the visually challenged to exercise their franchise in dignity, without the assistance of any other person. This was successfully used in Andhra Pradesh, Jharkhand, Bihar, West Bengal and Kerala and then in the entire country.

What is interesting about Devnar school is that they unleash the incredible capacity of students. The team from Devnar school plays cricket at the state, national and international levels. Bravo! three of their students have represented India in the World cup cricket held in Pakistan. Two of their students were selected for Indian cricket team to play against England in five ODIs. Indian team won all the five ODIs at London in 2007. Incredible!

Devnar students also play chess and take part in competitions held at the state and national levels regularly. They participate in chess tournaments conducted by the International abilympics. One student represented India in the world junior chess championship for the blind held in Spain and another student was placed sixth in the World chess championship held in Athens. Devnar school has also been conducting All India Chess Tournament from the past10 years.

Dance School for the physically challenged is another feather in the cap of Devnar School. Visually challenged students and other physically challenged students are trained by famous choreographers and dance masters. The students not only enjoy dancing but also give scintillating performances to delight the audience. One student won the second prize in the national classical dance competition held in Delhi. Devnar’s students also performed at the classical dance at Raj Bhavan on International Day of Persons with Disabilities, 3rd December, 2019. Amazing, isn’t it?

Dr Goud, said, “Students of Devnar have won Pratibha awards in the VII Class, S.S.C and intermediate exams and made the institution proud. All the children in Devnar school are provided free boarding, lodging and education. The residential English medium school from Nursery to 10th Class is equipped with all infrastructure on par with international standards. The school curriculum is designed in such a way that the students are taught academics, typewriting, computer skills (Basic), games, sports, music, dance etc.”

“We are also regularly conducting school children eye check-up programmes and rural eye camps and have been distributing medicines, free glasses. We also select patients for Cataract operations, these cataract patients are operated with IOL implantation free of charge at our hospital. They are provided free transport, food and medicines,” stated correspondent of the school Jyothi Goud adding that the institute is now standing as a role model in the country in the area of education of the visually impaired and empowerment.

The team at Devnar prints all the textbooks in Braille for the benefit of visually challenged students studying in T.S. and Andhra Pradesh. Devotional and religious books are also printed and Devnar School got an entry into the Limca Book of Records for printing Bhagwat Gita in Braille. Devnar School has a well-equipped computer lab with systems enabled with screen reading software JAWS (Job access with speech) which gives a sound output.

Even with Braille text books and embossed diagrams, detailed structures are hard for the students to perceive, because of their intricacy and complexity. To combat this difficulty, Devnar Science lab has more than 250 tactile models ingeniously prepared and originally designed by the school staff.

The future plans of Devnar school include; Starting an Engineering college of physiotherapy for the visually challenged at the national level and establishing a national level resource centre.