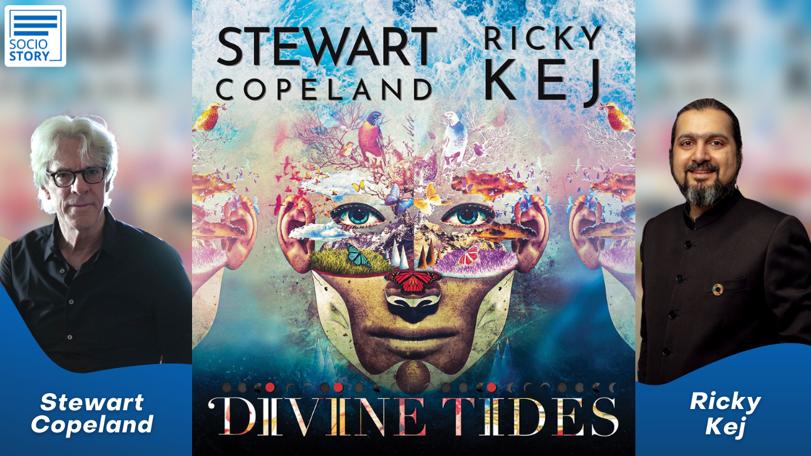 Indian Music Composer and Grammy Winner Ricky Kej has launched his 21st studio album in collaboration with five-time Grammy award winning artist and living legend, Stewart Copeland. This brand-new album is called ‘Divine Tides’ and it was launched on June 22, 2021.The album also features many acclaimed artists from around the world.

A tribute to the magnificence of our natural world and the resilience of our species, ‘Divine Tides’ illustrates these musings through its diverse musical canvas of soundscapes, melodies, pulsating rhythms and lush ambient textures that are weaved together by two master craftsmen Ricky Kej and Stewart Copeland. This album features 9 songs and 8 music videos that were filmed around the world from the exquisite beauty of the Indian Himalayas to the Icy forests of Spain.

The album will have a unique launch format. Every song in ‘Divine Tides’ will feature an accompanying music video that will be released from July 7th 2021 until September 28th 2021 as Stewart Copeland and Ricky Kej feel that all of the tracks deserve their moment in the sun. The complete album will be made available on all audio streaming platforms on the 21st of July 2021.

Grammy Winner Stewart Copeland, said, “One day during the Apocalypse I got a call from Ricky Kej about making an album. He had assembled an amazing collection of exotic musicians, or perhaps I should say deeply traditional musicians, in the exotic context of his inspired production style. The flow of ideas soon became a torrent of recording and music. The spiritual ambience (not something that I’m generally known for) infused my aggressions upon inanimate objects with loving passion. The timpani were ringing! The crotales were singing! Making this record has been a unique adventure in both music and divine awareness”.

Speaking to Socio Story, Grammy Winner Ricky Kej, said, “I had been working on a follow-up to the Grammy winning album "Winds of Samsara" and had cataloged some of my favourite melodies. Recordings were delayed because of a relentless touring schedule, but then the 2020 pandemic hit. Strict lockdowns presented an opportunity to spend more time in the studio. In 2016, I was privileged and honoured to collaborate on a song with Stewart Copeland. With the support of industry veterans Ralph Simon and Tarquin Gotch, I mustered up the courage to ask him to collaborate with me yet again, this time on a complete album. What followed was one of the best and most fulfilling personal and musical experiences I could have ever asked for. Working with Stewart was like attending one of the best masterclasses imaginable. Stewart is not only a living legend, but an extremely humble human being, filled with positive energy, that pushed us to deliver our very best for "Divine Tides".