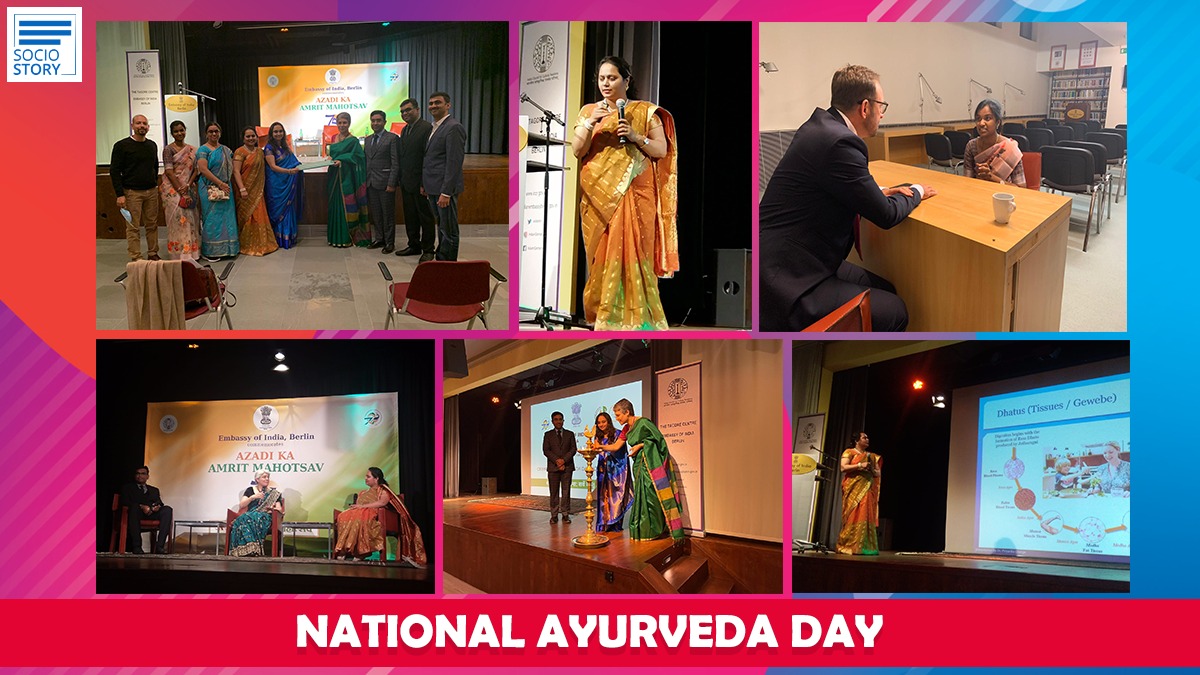 The National Ayurveda day is celebrated every year on the occasion of Dhanwantari Jayanti which is known as ‘Dhanteras’. Indeed, health is wealth and Dhanteras also means celebrating wealth. With time, the context of this festivity has also evolved and the pandemic has taught us the meaning of real wealth which is health. It’s high time we invest our time towards good and a healthy lifestyle. Socio Story highlights the Ayurveda Day celebrations that was organised in Germany.

There was a poster exhibition based on the topic ‘Ayurveda for Immunity’, Ayurvedic products exhibition and a free consultation by the Indian Ayurvedic doctors. IFAD, the German Association of Ayurvedic Doctors, is the largest organization of Ayurvedic doctors in Europe. As per sources, India receives a good number of wellness tourists from Germany who regularly visit Ayurveda resorts in many Indian destinations. The pandemic has created an increased movement of German wellness seekers to local Ayurveda centres.

In Germany, the Indian Consulate of Hamburg has taken many initiatives to promote and propagate Ayurveda with the help of the local German government during India week, Hamburg. Even during the pandemic, many online lectures and Facebook live programmes were organised to reach the local Germans and make Ayurveda a part of their daily life.

Ayurveda is a science which tells us about what is right and wrong for our life and health. Food is considered as a medicine and it is believed that the rules of eating food are followed, medicines are not required.

Health is a balance of body and mind and according to Ayurveda, it is a balance of Doshas (humors), Dhatus (Tissues) and Malas (excretion). Natural immunity plays a very major role in Ayurveda and it has the capacity and power to heal the body.

Dr. Priyanka Chorge Chaganti, Member of the Board of IFAD and founder of Ayuryogalaya, Hamburg, said that in the coming months of Ayurveda Day, IFAD plans to organize ‘Ayurvedic nutrition’ related events in other major German cities to popularise the concepts of Ayurveda and to enhance immunity.

Dr Anoosha N Shastry, Board member of IFAD gave the opening remarks about the Dhanwantari Jayanti, the Ayurveda Day. Gaurav Sharma, First Secretary of the Indian Embassy, other embassy officials and representatives of various German Ayurveda organizations were also present during the occasion of the Ayurveda day celebrations.