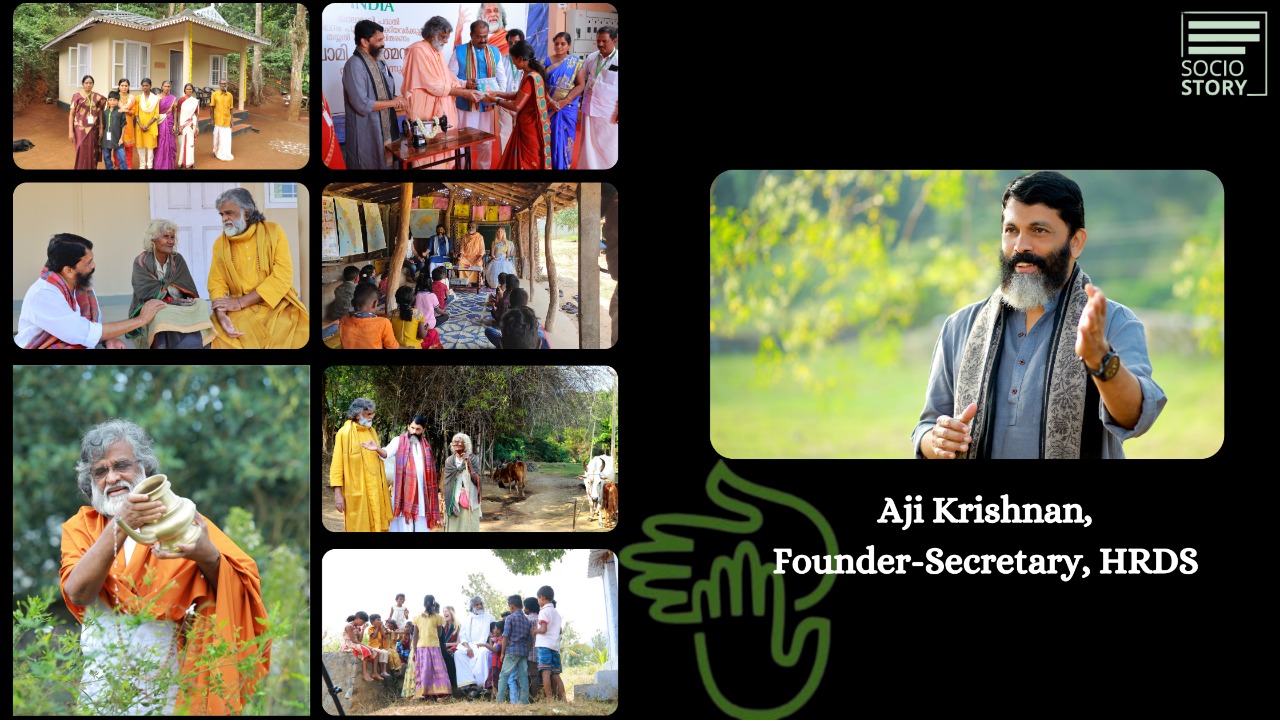 The workers in their plantations were the people who belonged to the ‘tribal’ community.Hailing from a family which was into farming and plantation business, Krishnan accompanied his father during the initial years and stayed there for a while. Throughout the stay, Krishnan along with his father would go around the tribal areas and gradually got to know about their lives, their culture and atrocities they encountered.

“He was the one who taught me equality and induced me to work for justice. I felt more empathetic. I started to read between the lines and explore the realities. I experienced the harsh realities that these deprived people were forced to undergo. They were purposefully held back into the dark so that a bunch of people could enjoy exploiting them. I realized that a movement was inevitable to free these oppressed from the clutches,” shared Aji Krishnan, son of CK Krishnan, a planter and a frontier in bringing up group farming in the high ranges of Kerala and VK Omana, a prolific and devoted teacher.

For bringing equality and development among the downtrodden people, Krishnan required a platform to implement his vision. So, Highrange Rural Development Society (HRDS India), a registered Non-Governmental Organization was founded and endowed by Founder Secretary Aji Krishnan and President Dr S Krishnakumar, IAS (Retd), Former Union Minister. Ushered by Guru Atma Nambi, the organization diligently works for the development of the rural as well as tribal people by taking development programs to interior and physically inaccessible areas of the country. HRDS India was formed in 1995 to pursue wider social aims by strengthening the downtrodden and weaker sections of society. HRDS has its extensive roots in the rural and high range territories of Kerala and is resolutely devoted in constructing houses for the indigenous native people.

With tribal development as one of the prime focal areas of HRDS, the action plan is developed to provide basic needs like home, food, shelter, education, clothing and medical care for tribal society- the most neglected populace of the country. HRDS when formulated was confined to address the issues of tribes residing in the high ranges of Idukki. But soon, they realized that Idukki was only a beginning, the journey was yet incomplete. HRDS now attempts to address all aspects of tribal and rural development across India, keeping Kerala, Tamil Nadu, Gujarat, Tripura, Assam and Jharkhand in the central domain.

HRDS has implemented various projects for the upliftment of poor, women empowerment, tribal development and child help projects. HRDS had successfully formed more than 3,500 SHGs, each consisting of five people and gave them training and monetary aid for doing various types of farming.

Throwing light on another project of HRDS, Krishnan, said, “The Micro credit initiative HRDS India and Gramin bank of Bangladesh” financing program was successfully implemented with aid from Nobel prize winner Dr. Muhammad Yunus funds, which helped to create an income source for many families in Tamil Nadu and Kerala. Under the women empowerment project developed by HRDS, more than 540 women were given skill development training which helped them to get placement in various SSI units in South India. For the school going children HRDS provides kits consisting of a pair of uniform, footwear, umbrellas and some books.”

In addition to this, it runs effective projects in service deficient tribal areas and addresses the tribal problems and issues more consistently and adequately. It further provides them with requisite amenities for the noble and respectable living and imparts skill development training to the youth dwelling there. Its efforts are directed at rehabilitating total human development and bringing a social change through awareness as well as forming local level organizations to ensure social justice and self-reliance.

Tribal development being one of the prime focal areas of HRDS, here are a few interesting projects being executed:

The focus of the project is to provide healthy and hygienic living spaces, which are also eco-friendly. HRDS proposes to construct one million houses for the poor tribal homeless families in India at free of cost, within a period of 9 years for around 40 Lakh tribal people residing all over India. “As part of its first phase, HRDS, aims to construct 1000 for the Tribal families at Attappadi. Out of which the construction of 192 houses has been completed, and 108 houses are in its final stage of completion,” said Guru Atma Nambi, spiritual guiding force of HRDS.

Large scale supplement of raw material is essential for making Ayurveda medicine for which the cultivation of medicinal plants is a prime necessity. The Karshaka project by HRDS comes as an alternative means to generate medicinal plants. The project is being implemented in a region spread across five thousand acres of tribal land.

The plight of poverty-stricken women is even worse and remains inadequately unacknowledged. The inception of the women empowerment project – Jwalamukhi is in light of assisting these deprived women to eke out an income through the formation of Self-Help Group (SHG). They work together and run small-scale businesses.

HRDS has been sanctioned the Skill Development project in the state of Kerala as well as Tamil Nadu. It focuses on imparting skills through NSDC affiliated centres.

The HRDS Niramaya project is based on conventional drug therapy, rooted in Attappadi. It will advance the treatment of intense sickness and is also an important step to foster a healthy society as it renews the scope of age-old traditional medicines through its herbal and organic remedies.

Parasparam is a social-psychological, learning movement set in motion by HRDS for the upliftment of the adolescent young generation. They fundamentally work towards helping people who are subjected to excessive substance use. A 24*7 tele-counselling help desk for psycho-social support and guidance in the name Parasparam Green Voice was launched in order to help the people encountering the issues of increasing fear, anxiety, sickness, stress and other social and psychological problems.

Ekagrah project started off in 2009, to help those children who are deprived of education due to financial constraints. In its primary phase it began by issuing financial aid to students as scholarships incentivizing their spirits to excel in academics. Apart from these, welfare activities are also being implemented in the African continent by some persistent volunteers and members of HRDS.

A recipient of Baba Saheb National Award 2016 for outstanding contribution for the upliftment of society and it’s reformation, Krishnan, said, “The tribal community were not able to step forward as their lives were clutched in their pre-existing lifestyle. Also, they have been exploited, oppressed and misguided for personal gains of some. The only way to reach the roots is by furnishing basic needs like home, food, shelter, education, clothing and medical care for tribal society and providing them the wisdom of empowerment.”

In an endeavour to break the vicious circle of poverty and illiteracy through comprehensive welfare projects for tribal development, Krishnan concluded by saying, “I intend to create a world where the dignity of a person is not based upon the caste they are born in or the deity they worship. The tribal people have been oppressed for decades and bringing them to the mainstream is our goal. This will impel my mission to see more of those smiles.”