“INS Vikrant is not just a warship. It is a testament to the hard work, talent, influence and commitment of 21st century India” 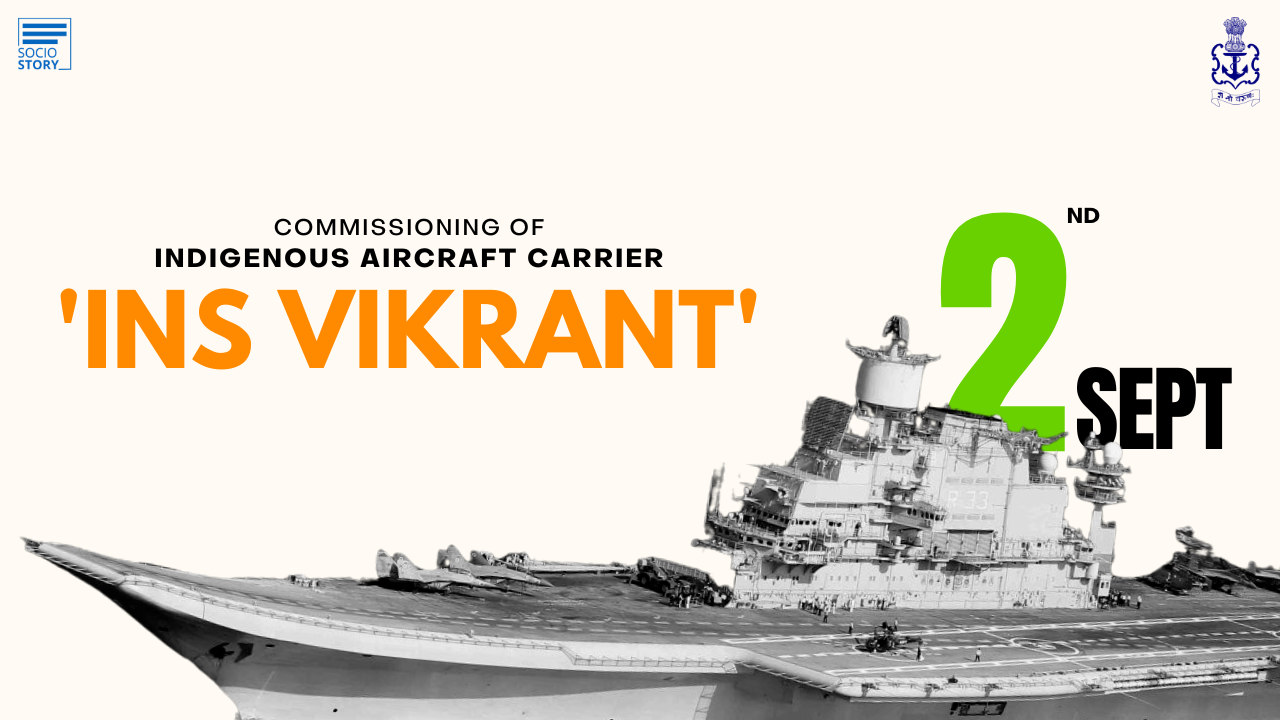 Showcasing the country’s growing prowess of indigenous manufacturing and a major milestone in the path towards ‘Aatmanirbhar Bharat’, Prime Minister Shri Narendra Modi commissioned the country’s first indigenous aircraft carrier Indian Naval Ship (INS) Vikrant at Cochin Shipyard Limited (CSL) on September 02, 2022. ﻿ During the event, the Prime Minister also unveiled the new Naval Ensign (Nishaan), doing away with the colonial past and befitting the rich Indian maritime heritage. He dedicated the new ensign to Chhatrapati Shivaji.

Addressing the gathering, the Prime Minister said, here on the coast of Kerala, every Indian is witnessing the sunrise of a new future. This event being held on the INS Vikrant is a tribute to the rising spirits of India on the world horizon. He said that today we are seeing a manifestation of the dream of the freedom fighters where they envisioned a capable and strong India. The Prime Minister exclaimed “Vikrant is huge, massive, and vast. Vikrant is distinguished, Vikrant is also special. Vikrant is not just a warship. This is a testament to the hard work, talent, influence and commitment of India in the 21st century. If the goals are distant, the journeys are long, the ocean and the challenges are endless – then India's answer is Vikrant. The incomparable Amrit of Azadi ka Amrit Mahotsav is Vikrant. Vikrant is a unique reflection of India becoming self-reliant.”

Commenting on the new mood of the nation, the Prime Minister said, no challenge is too difficult for today’s India. He said “today, India has joined those countries in the world, which manufacture such a huge aircraft carrier with indigenous technology. Today INS Vikrant has filled the country with a new confidence, and has created a new confidence in the country.” The Prime Minister acknowledged and praised the contribution of the Navy, engineers of Cochin Shipyard, scientists and specially the workers who worked on the project. He also noted the happy and auspicious occasion of Onam that is adding even more happiness to the occasion.

Every part of INS Vikrant has its own merits, a strength, a development journey of its own. It is a symbol of indigenous potential, indigenous resources and indigenous skills. The steel installed in its airbase is also indigenous, developed by DRDO scientists and produced by Indian companies, he said. Explaining the massive proportions of the Carrier, the Prime Minister said it is like a floating city. It produces electricity that is sufficient to power 5000 households and the wiring used will reach Kashi from Kochi, he said. He said that INS Vikrant is a living embodiment of the Spirit of the Panch Prans that he proclaimed from the ramparts of Red Fort.

The Prime Minister talked about the Indian Maritime tradition and naval capabilities. Chhatrapati Veer Shivaji Maharaj, he said, built such a navy on the strength of this sea power, which kept the enemies on their toes. When the British came to India, they used to be intimidated by the power of Indian ships and trade through them. So they decided to break the back of India's maritime power. History is witness to how strict restrictions were imposed on Indian ships and merchants by enacting a law in the British Parliament at that time, the Prime Minister said.

The Prime Minister noted that today on the historic date of September 2, 2022, India has taken off a trace of slavery, a burden of slavery. The Indian Navy has got a new flag from today. Till now the identity of slavery remained on the flag of Indian Navy. But from today onwards, inspired by Chhatrapati Shivaji, the new Navy flag will fly in the sea and in the sky.

The Prime Minister remarked that when Vikrant descends to protect our maritime zone, many women soldiers of the Navy will also be stationed there. With the immense power of the ocean, boundless female power, it is becoming the lofty identity of the new India. Now the Indian Navy has decided to open all its branches for women. The restrictions that were there are now being removed. Just as there are no boundaries for the capable waves, there will be no boundaries or restrictions for the daughters of India.

The Prime Minister said drop by drop water becomes like a vast ocean. He also mentioned the salute by indigenous canon on this Independence Day. Similarly, if every citizen of India starts living the mantra of 'Vocal for Local', then it will not take long for the country to become self-reliant.

Commenting on the changing geo-strategic situation, he said in the past, security concerns in the Indo-Pacific region and the Indian Ocean have long been ignored. But, today this area is a major defence priority of the country for us. That is why we are working in every direction, from increasing the budget for the Navy to increasing its capability, he said. The Prime Minister said that a strong India will pave the way for a peaceful and safe world.

In his address, Raksha Mantri Shri Rajnath Singh termed the commissioning of INS Vikrant at the onset of 'Amritkal' as a testament to the Government’s strong resolve to ensure the safety and security of the nation in the next 25 years. “INS Vikrant is a glowing symbol of an aspirational and self-reliant ‘New India’. It is an icon of pride, power and resolve of the Nation. Its commissioning is an unprecedented achievement in the path of building indigenous warships. Indian Navy’s tradition is ‘old ships never die’. This new avatar of Vikrant, which played a stellar role in the 1971 war, is a humble tribute to our freedom fighters and brave soldiers,” he said.

Shri Rajnath Singh also asserted that it is a key responsibility of the Indian Navy to secure the country’s maritime interests for uninterrupted maritime trade, amid the constantly-changing global situation. He commended the Navy for always being the ‘First Responder’ in times of any national or international crisis and exuded confidence that the commissioning of INS Vikrant will further enhance the force’s capability. He added that this is an assurance to the friendly foreign countries that India is fully capable of meeting the collective security needs of the region. “We believe in a free, open and inclusive Indo-Pacific. Our efforts in this regard are guided by ‘SAGAR’ (Security and Growth for All in the Region) as envisioned by the Prime Minister,” he said.

The Raksha Mantri also described the commissioning of INS Vikrant as a confirmation that the Government’s unwavering commitment to achieve ‘Aatmanirbhar Bharat’ is not an isolated policy. It is an important part of the huge transformative change taking place in India under the leadership of Prime Minister Shri Narendra Modi, he said.

Shri Rajnath Singh commended the Prime Minister for his visionary leadership in realising the dream of ‘Aatmanirbhar Bharat’, stating that the government has made path breaking changes in all sectors such as defence, health, education, agriculture, trade, transport and communication. He listed out a series of steps taken by Ministry of Defence to achieve the objective. These include setting up of defence corridors in Uttar Pradesh and Tamil Nadu; issuance of three positive indigenisation lists; earmarking of 68% of capital procurement budget for domestic industry; Defence Production and Export Promotion Policy 2020 and increase in FDI limit. He said, the aim is ‘Make in India, Make for the World’ and exports of more than $400 billion in the last year is a proof of this vision.

“As India is moving rapidly towards a $5 trillion economy, our share in global trade will increase in the coming times. If the share will increase, a large part of it will inevitably be through maritime routes. In such a situation, INS Vikrant will prove to be crucial to safeguard our security and economic interests,” the Raksha Mantri said.

Speaking on the occasion, Chief of the Naval Staff Admiral R Hari Kumar voiced the Navy’s resolve for India@100 to become completely self-reliant until 2047, consisting of ‘Made in India’ ships, submarines, aircraft, unmanned vessels and systems and remain a ‘Combat Ready, Credible, Cohesive and Future-Proof Force’. He added that the Navy is determined to move forward on the path of five pledges - developed India, removing any sign of servility, pride in heritage, unity and fulfilling the duties -  as envisioned by the Prime Minister.

The Chief of the Naval Staff exhorted the Commanding Officer and crew of INS Vikrant to take forward the proud legacy of erstwhile Vikrant which served the country for 36 glorious years and played a significant role in the 1971 war.

The commissioning of INS Vikrant is a proud moment for the Nation as it showcased the ‘Aatmanirbhar’ credentials during ‘Azadi ka Amrit Mahotsav’ and a true testament to the country’s zeal and fervour in pursuing capability build up towards enhanced maritime security in the Indian Ocean Region. With the commissioning, India has entered into a select band of Nations having niche capability to indigenously design and build an Aircraft Carrier and real testimony to the Nation’s resolve for self-reliance and ‘Make in India’.

INS Vikrant is designed by Indian Navy's in-house Warship Design Bureau (WDB) and built by Cochin Shipyard Limited, a Public Sector Shipyard under the Ministry of Ports, Shipping & Waterways, Vikrant has been built with state of the art automation features and is the largest ship ever built in maritime history of India.

The 262.5 m long and 61.6 m wide Vikrant displaces approx 43,000 T, having a maximum designed speed of 28 Knots with endurance of 7,500 Nautical Miles. The ship has around 2,200 compartments, designed for a crew of around 1,600 including women officers and sailors. The carrier is designed with a very high degree of automation for machinery operations, ship navigation and survivability. The carrier is equipped with the latest state of the art equipment and systems.

The ship is capable of operating an air wing consisting of 30 aircraft comprising MiG-29K fighter jets, Kamov-31, MH-60R multi-role helicopters, in addition to indigenously manufactured Advanced Light Helicopters (ALH) and Light Combat Aircraft (LCA) (Navy). Using a novel aircraft-operation mode known as Short Take Off But Arrested Recovery (STOBAR), INS Vikrant is equipped with a ski-jump for launching aircraft, and a set of ‘arrester wires’ for their recovery onboard.

With 76% indigenous content, construction of INS Vikrant has resulted in direct employment generation for over 2,000 employees of CSL. In addition, it has resulted in indirect employment generation for approx 12,500 employees for over 550 OEMs, sub-contractors, ancillary industries and over 100 MSMEs as well, thereby bolstering plough back effect on economy.

Resonant to the ongoing national endeavour to move away from colonial past, the need was felt to transition to a new design that drew inspiration from our history. The White Ensign identified nation-wide with the Navy, now comprises two main constituents - the National Flag in the upper left canton, and a Navy Blue - Gold octagon at the centre of the fly side (away from the staff). The Octagon is with twin golden octagonal borders encompassing the golden National Emblem (Lion Capital of Ashoka – underscribed with ‘Satyamev Jayate’ in blue Devnagri script) resting atop an anchor; and superimposed on a shield. Below the shield, within the octagon, in a golden bordered ribbon, on a Navy Blue background, is inscribed the motto of the Indian Navy ‘Sam No Varunah’ in golden Devnagriscript. The design encompassed within the octagon has been taken from the Indian Naval crest, wherein the fouled anchor, which is also associated with colonial legacy, has been replaced with a clear anchor underscoring the steadfastness of the Indian Navy.