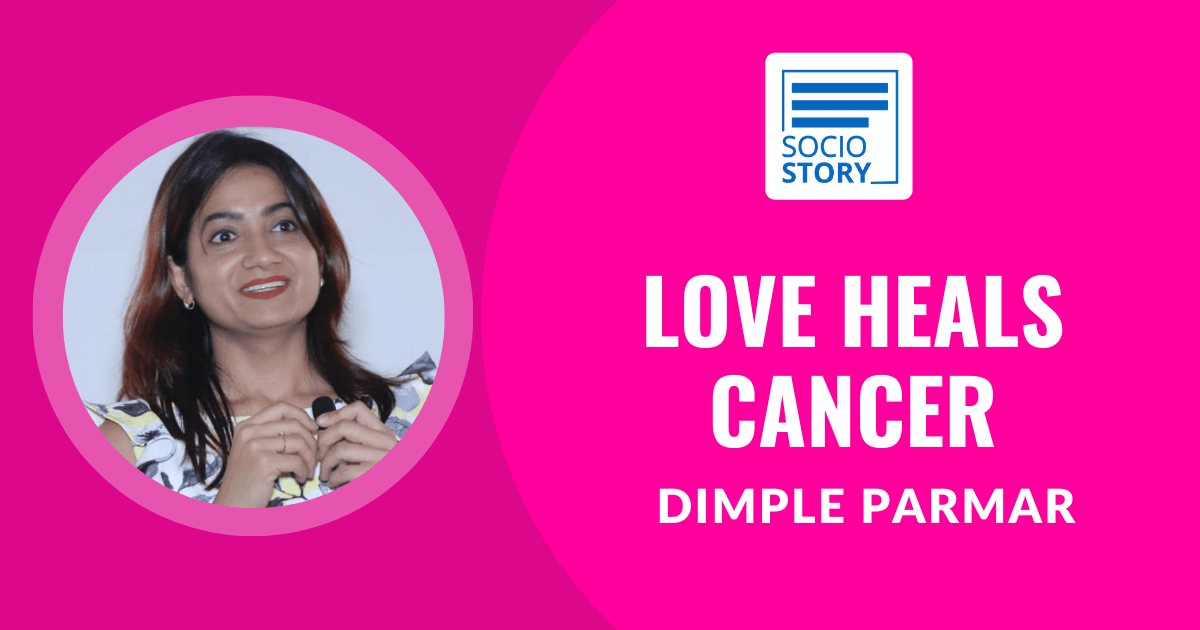 Nitesh and Dimple are two names of one soul. The concept of soulmates seems like a farfetched one in today's materialistic world until you look at this couple’s story and realise that God indeed resides in the hearts of those who love without expectations. You understand it's real for how else you can explain this remarkable story.

In 2016, neither Dimple nor Nitesh could have guessed what fate had in store for them. Eldest among his siblings, Nitesh was a simple man with limitless determination and focus. Being the sole earning member of the family, he was working hard to improve his family's condition.

Seeing as he was an alumnus of IIT-Kanpur and studying in IIM-Calcutta at the time, one would have thought he was on the way to a better life. On top of that Nitesh had put the foundation of a successful start-up which he was working to flourish.

The light of every room, Dimple had always been an energetic and joyful girl. When she entered IIM Calcutta, she had no motive of finding a boyfriend let alone a husband. But such is destiny; it doesn't pay heed to our plans. It gently nudges and guides us to the way that it has planned for us. When she first met Nitesh, Dimple herself was working on her own start-up. She found him to be quite intense and borderline rude. However, as she continued interacting with him and peeled the layers of his hard facade, she found a brilliant, caring, and pragmatic individual she couldn't help but admire. However, it hadn't reached the stage of loving at that time.

It might sound like the story of a Bollywood film because it is, especially because the bend in the road came soon after. In September 2016 a dark cloud entered Nitesh's life. Nitesh after a routine check-up found out that he had Stage III Colorectal Cancer. He was broken and didn’t know what to do. The brave man and his dreams took a step back as he had to deal with a harsh reality.

Nitesh managed to rise above the initial shock and with his family's support, Nitesh started the treatment. Nitesh approached his health condition in a logical manner, believing there to be a solution to every problem. Like a typical MBA, he listed his short-term and long-term goals, organised funding details, on-going academic requirements, treatment options and diet plan using Excel Sheets. His will to live and to fight this dreadful disease was supported by his friends, family, batchmates and alumni of IIT and IIM, who helped bear the initial cost of the treatment.

Lending a helping hand in his studies and daily chores, Dimple stood resolute as a faithful friend by Nitesh's side. When Nitesh had to move to a place closer to lecture hall during MBA, Dimple chose to stay close to him to help him in his difficult time. She forsook everyone and everything to make sure Nitesh rose like a phoenix from the ashes. And during that time living with him she got to know the real Nitesh; the determined but thoughtful individual who she couldn't help but fall in love with.

As Dimple was losing her heart on one side, Nitesh who had no intention of pursuing a relationship and was focused on gaining his health back felt his heart softening. He started respecting and caring for Dimple more and more as time passed. Their classmates witnessed the growing fondness every day and knew there would come a time that they would be one of the famous power couples of IIM Calcutta. The union of this couple as witnessed by their friends and family was nothing short of a miracle. They had planned a simple yet illustrious future together, and we were already shopping for their marriage.

After a year-long struggle filled with interventions including Surgery, Radiation and Chemotherapy, the couple thought the nightmare would near its end. However, just when Nitesh and Dimple thought they had defeated Cancer, his post-treatment scan of June 2017 showed that the disease had metastasized to his lungs, pelvis and other abdominal areas - a total of 12 tumours. Not accepting defeat even in the face of death, this time Nitesh and Dimple pulled an ace from their sleeve and tossed it into fate’s face. As the couple took the famed Saat Phere (wedding vows) and joined each other in holy matrimony, they vowed in front of God to never leave each other's side. And Dimple the newly wedded wife of Nitesh promised to heal his husband with her faith and love.

On March 14th 2018, however, Cancer took Nitesh away from Dimple expecting her to cry for some days and forget that he ever came in her life. "In sickness and in pain". That's how the wedding vows go right? The only difference? For Nitesh and Dimple, it was extreme pain, fatigue and death. But the girl who didn't think anything of the rules of this society; how could she be stopped by death? The wedding vows end with death, but Dimple and Nitesh's love didn't end with it. After the afterlife set in, Dimple let his husband go to a better place and set her eyes on creating this world a better place for the Cancer patients still in this world.

Having received Financial & Logistics support and an immense amount of love and care from complete strangers, Nitesh always wanted to give back to the society that unconditionally helped him. He had confided in Dimple his desire to dedicate his life towards helping humanity fight Cancer. The couple had promised to help others fight the disease as soon as they were back on their own feet. But as it turned out Dimple would walk this path alone, albeit with Nitesh in her heart. That is how Love Heals Cancer was born.

A lot has changed in these past months. The couple has been of help to thousands across the globe. Dimple no longer walks alone as there are many other warriors, standing shoulder to shoulder, willing to dedicate their lives to fighting this disease. Nitesh is no more with us but his spirit is and of course, the angel who stood by his side. When many pragmatic people would've run away from a guy who was destined to die, Dimple stood by Nitesh's side resolute and unwavering. Her love for Nitesh is only surpassed by the dedication with which she has started this organisation to help people like Nitesh receive the best possible medical and spiritual advice. This might be her battle, but the war is ours. And for giving us this purpose in life, we thank her.

After all, Nitesh's last wish was to give hope to everyone around him especially the countless people who are diagnosed with Cancer every day. They fight this deadly disease many times lacking the courage, resources and/or the patience to do so. To those people this website and this organisation is a shout-out: you are not alone. We are with you. We don't charge anything and never intend to. We just want to help those who need it and spread their stories around the world for they are the true fighters among us.

Perhaps destiny brought together these star-crossed lovers so that it could separate them and propel everyone who encountered them on a journey towards love and care. Perhaps it was just a coincidence. Or maybe a cruel twist of fate. Whatever it was, it gave Dimple the strength to stand strong even after losing the one person who was so close to her heart. Reeling from the loss of her husband and the only man who could kindle her passion, Dimple still has not accepted defeat and certainly not from Cancer.