Meet Akash Chourasiya who left his dreams of becoming a doctor behind to focus on saving the environment through sustainable farming. 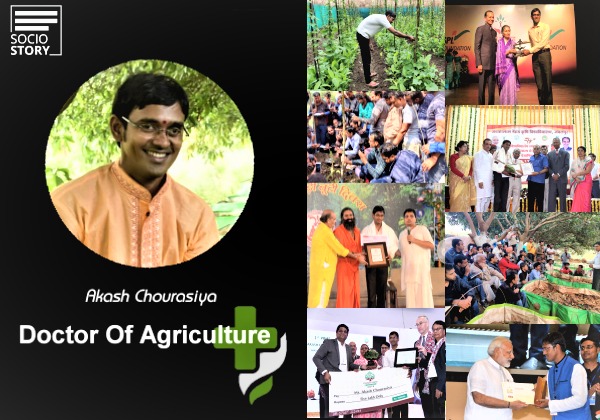 When Akash Chourasiya was preparing for the AIIMS entrance exam, life took a turn for the better. After looking at the growing population in the 21st century, the growing number of diseases among people and the requirement of hospitals for the population, Akash was determined to practice organic farming with the objective of providing chemical-free food to the nation. Akash (32) who hails from Sagar district in Madhya Pradesh is now a multiple award-winning farmer.

Born to Komal Chourasiya and Ramkali Chourasiya who practice betel leaf farming in their village, Akash, after completing his higher secondary education, aspired to become a doctor and cure people from diseases. But, he realised that this will not help in fulfilling his objective because of the fact that a person’s health is directly related to the food on their plate. He understood the grass-root problem, changed his direction and started farming on just ten decimal land.

Akash has been instrumental in forestry, horticulture, agri-entrepreneurship, production of organic manure and best production in cereal crops by practicing organic farming. “Today by joining hands with many youngsters from all over India, I am encouraging cow based eco-friendly sustainable farming methods. All my efforts not only help in developing thousands of agro-entrepreneurs but also plays a great role in reverse migration of the youth towards their native place,” stated the young organic farmer whose ambition became to help chemical-free food reach people’s plates.”.

The first invention of this eminent farmer was a five-layer farming model. “I have invented five-layer farming in which we can grow five crops on only one field at a time. The benefits of this model are reduced menace of insects, no effect of climate change and less requirement of manure. In this way by growing 4-5 crops together we reduce expenditure and increase production,” said Akash who uses only indigenous seeds, as they are climate-resilient and less prone to pest attacks, which is very important for a vegetable crop.

The second invention he did was making vermi-phos manure. “I have invented vermi - phos manure, which consists of 70% -75% Indian cow ‘s dung and 25%-30% rock phosphate powder. These two are mixed and are left for 15-20 days. By observing convenient temperatures, earthworms are added in it. The rest of the process goes on for a few more days and by using this manure, we get good production. It is an alternative of Diammonium phosphate (DAP) which is the world's most widely used phosphorus fertilizer,” stated the sustainable farmer.

The third invention was soil and water conservation. “I invented three systems for conserving water and to stop soil erosion. Through these systems, a farmer can prevent the erosion of 4,000 kg of soil from the farm and can recharge 30 lakh litres of water in every acre of land,” said the young farmer who is committed to sharing his knowledge through free training sessions and workshops to help other farmers. Since 2013, he has trained close to 48,000 farmers and told them about 12-15 combinations of crops that are suitable for multi-layer farming.

A few of the notable achievements of Akash Chourasiya who is an organic farming advisor and trainer are: