Meet Anang Tadar who is striving to give a ray of Light to the Blind through his invention. 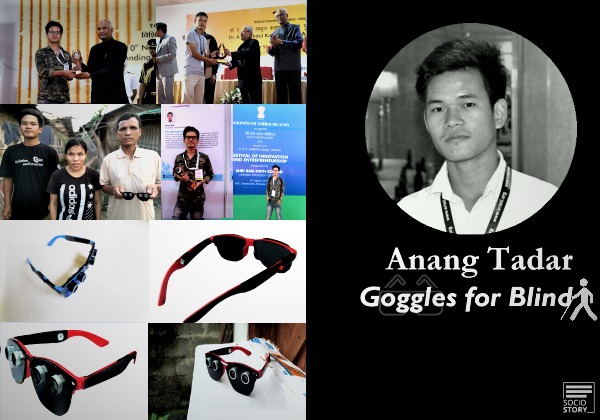 ‘Hope sees the invisible, feels the intangible, and achieves the impossible’ and one such star giving a helping hand to the people in the dark is Anang Tadar from Nirjuli village of Papum Pare, Arunachal Pradesh. The thought of developing a device called ‘Goggle for Blind’ (G4B) occurred to Anang when he met a blind woman while going back home from a nearby town. She asked Anang for directions, and that’s where he started thinking, how the life of a blind person might be. What are the difficulties they face in their daily life?

That led him to think on innovative ideas to bring a change in the lives of people and speaking to Socio Story, Anang (25), said, “In our day to day life we come across many obstacles and obstructions. Obstacles like electric poles, signboards, parked vehicles etc. which we do not have a problem getting passed by as a normal person. But for the blind people, the very same obstacle is a significant problem. The simplest way to overcome these obstacles and avoid bumping into them is by using a cane stick. However, the cane sticks can only be used for detecting the obstacle lying below our knee. In most cases they fail to detect the overhang obstacles.”

The day to day life is filled with all these overhang obstacles like signboards, an overhang beam, laundry poles etc. So to overcome the disadvantages of the cane stick, this Arunachal tech genius has developed a device called Goggle for Blind.

G4B is a smart goggle fitted with modern electronics and sensor which is capable of detecting the obstacles lying in front of the wearer. It’s working principles are based on the principle of the ‘Echolocation’ used by the Bats. In echolocation, ultrasonic frequency waves are emitted from the mouth or the nose of a bat and if there is any obstacle in front of the bat, the ultrasound waves get deflected and the bat hears the echo.

Using the same principle in G4B, the wearer is alerted in advance if there is any obstacle in front of them. The smart goggle is capable of detecting obstacles much in advance which helps the blind people to avoid colliding against them. It also makes the wearer aware of location and the direction of the obstacles. By using Goggle for Blind, people with visual impairment can easily navigate around their environment without the worry of bumping into things and people.

Hailing from a socio-economically marginalised family, Anang initially developed the G4B with his pocket money and had exhibited the prototypes in different events. In one of the events of Innovation Festival, NIF (National Innovation Foundation) noticed his prototype and they helped him further develop it, refine it and help him with the testing of the device. They will also help him launch the product once it's completed.

Such an idea being first in India, Anang who is pursuing his civil engineering, had been able to develop different prototypes using different sensors. The young boy who bagged the National Grassroots Innovation award and Traditional Knowledge Award 2019 (National Award given by The President of India), said, “I did many testing’s with my prototypes in real life with blind people and they were very impressed with the product and they want the product to be available to them very soon. Right now, I am in the phase of developing the prototype into a final product. UNICEF, among the others, has assured help and support to my invention.”

Adding feathers to his cap, the young star has also bagged the State Gold Medal for Innovation and Technology, the BRICS Innovator Prize (South Africa) and the Dinanath Pandey Smart Idea Innovation award. The tech genius wishes to make the product cost-effective so that it is affordable by every blind person. So far, the plan is to develop and launch the product as soon as possible so that blind people can make good use of the technology and make their daily life hassle-free.