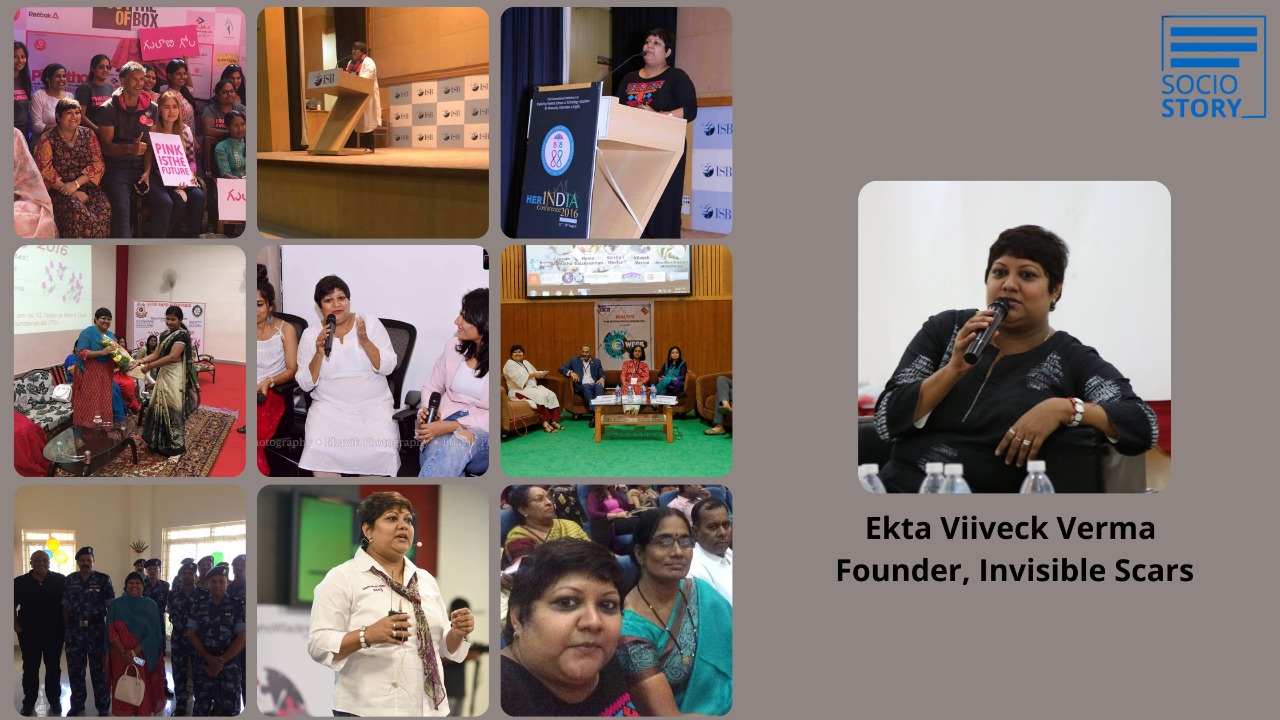 The ‘Scars’ of domestic violence and abuse, although deep-rooted and traumatizing are usually invisible. But, why? Because domestic abuse is understood as a family matter and not as a violation of human rights. Emotional abuse has been normalised and accepted as part and parcel of life. Considering the conditioning and the stereotyping of abuse propagated by society, nobody considers the impact of abuse caused on its recipient while it is almost passed down as a legacy.

The lockdown has even further marginalised DVA survivors by throwing them into unsafe households with no respite from their abuser. As per reports, domestic violence complaints were at a 10-year high, in India during COVID-19 lockdown. UN estimated that 243 million women and girls aged 15-49 had experienced sexual or physical violence in the past 12 months. Domestic Violence and Abuse was termed as the ‘Shadow Pandemic’ by UN Women.

“Growing up in a very conservative community, domestic abuse existed all around me. Girls from my community were conditioned to believe that marriage was the be-all and end-all of life. A girl was called unsuccessful if she didn’t get married at an ‘appropriate age’, couldn’t ‘make her marriage work’ or did not have children at what was considered an appropriate age. Girls were never taught the value of being financially independent, carving out careers of their own or being educated enough to fight back bad circumstances/ untoward incidents,” shared Ekta Viiveck Verma from Hyderabad.

She further added, “Practically all through my young adulthood, I saw women live in very stressful and unhappy environments. Sadly, they attributed their unhappy lives to their karma. They had very lonely lives with family and friends who were not really able to comprehend their situation. This led me to think that a safe space where we can at least talk to others (who are not family and friends) in a non-judgemental way is required. And this thought led to the formation of ‘Invisible Scars’.”

Invisible Scars is a support group for domestic abuse survivors and their families. The group comprises people who are or were in the same situation or have helped someone facing abuse. Sometimes family and friends cannot quite understand what it is like to be in that situation, so the group helps fill this void. By helping others, people in a support group strengthen and empower themselves. The emotional support derived from support group participation can help reduce stress, positively impacting mental and physical health. It is a safe and an anonymous online space where the members celebrate, nurture, encourage, and console one another.

“This a space for community gatherings. People can share personal stories, express emotions and be heard in an atmosphere of acceptance and encouragement. We help build an ecosystem of empathy. Survivors can reach out to us for help on understanding abuse, how to report abuse, seek counselling, get legal help, temporary economic relief and vocation help,” shared Verma by adding that the vision is to ‘empower’ abused individuals and eventually become a uniform, compassionate, inclusive and connected ecosystem of support, transcending geographic boundaries, so that every abuse survivor gets the help they need, when they need it.

Behavioural change and fighting societal conditioning are the most critical aspects while dealing with domestic abuse in India, believes Verma. Even though the system has laws and provisions to help domestic abuse survivors, the systems are not efficient in their functioning. Sometimes appropriate help is not available or the system revictimizes the survivor. Sometimes the survivor continues with a bad relationship due to familial pressure or a flawed understanding of what they deserve. “We hope to empower survivors with the knowledge that will help them fight their own battles. We also hope that through several awareness programs and initiatives, we will be able to educate survivors about their rights and how conditioning negatively impacts their ability to make decisions. Awareness programmes will also include understanding of different types of abuse especially emotional/psychological, economic and digital,” opined Verma adding that, owing to the patriarchal structures, domestic abuse is often minimised and normalised by both women and men.

Besides that, Verma shared that the systems designed to help women are also not robust. Helplines and psychosocial support are largely in a dysfunctional state with no proper mechanisms of timely response. DVA cases in court have become long drawn battles with cases dragging on for years and with hope nowhere in sight. It is necessary to reach all levels of society with the help of the government, civil society bodies and by making systemic help more efficient and uniform.

Speaking on the impact that has been created, Verma said, “We have touched close to 750+ survivors from 17 cities across the country and from 4 different countries, helping them with the help they require to empower them. We have done DVA, Rape, Sexual Harassment, Gender Sensitisation sessions with 3200+ people. One of our unique projects, launched in 2020, is the domestic abuse relief fund, through which we have helped survivors of domestic abuse with food, shelter/rent, medical aid, legal aid, skilling and training and prepare them to race ahead.”

The impact of abuse is huge on the mental health and economic resources of an individual and the youth of the country, said Verma. All support systems need to be enabled by technology to expand social support and reach the survivors. “At Invisible Scars, we have designed a blueprint for a technology solution and we are seeking technology and CSR partners to help us move this forward. We are excited at the prospect of someday being able to help millions of survivors globally, using resources provided by their local state. We are also excited at the prospect of creating intelligence with technology interventions. We believe every single human being deserves to be respected in their relationships and at the end of the day that is what matters,” concluded 45-year-old Verma.