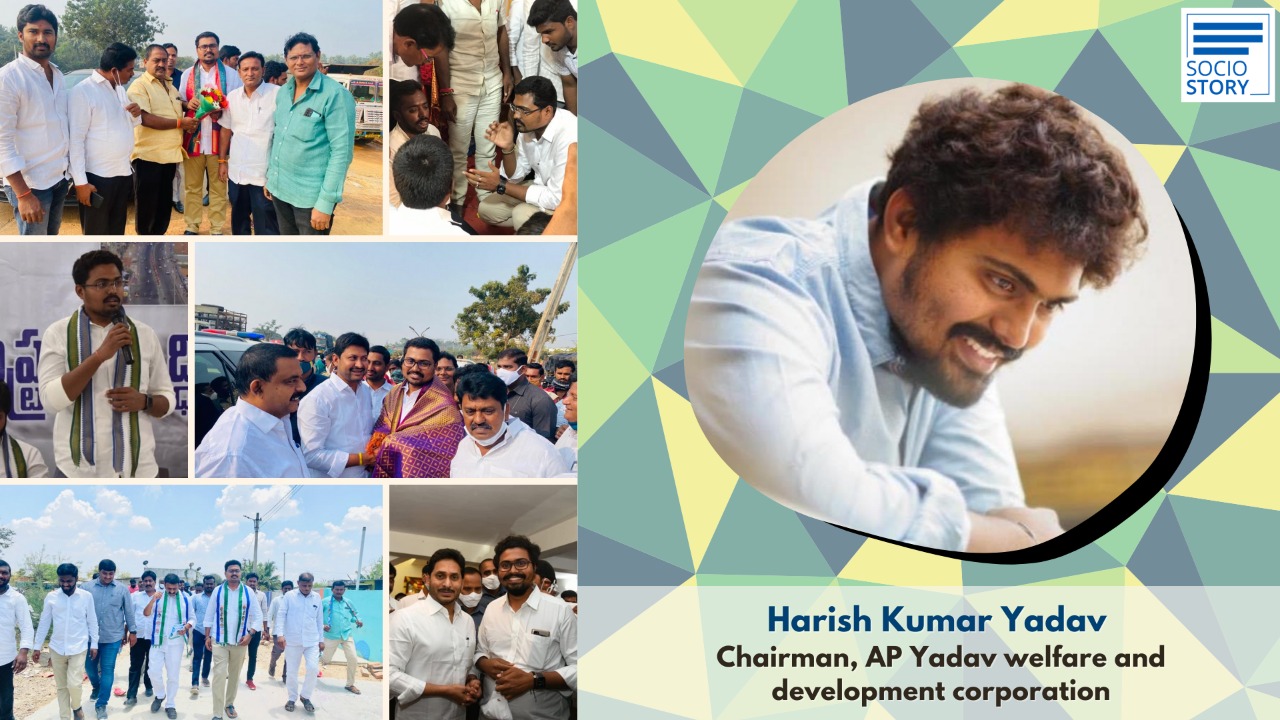 To make a difference, there is a need for the young people to engage and actively participate in politics. The need of the hour is to develop policies that respond to the needs of the younger generation. Students need to take up the idea of politics as their career and help promote their cause. Socio Story brings one such story of a young guy who wishes to bring a change through politics.

“It’s the most rewarding thing to be a civil servant,” opines Nanyampalle Harish Kumar Yadav who hails from Pulivendula, a town in Andhra Pradesh. Harish was appointed as the first Chairman of the Andhra Pradesh Yadav welfare & Development corporation in 2020.

During the Covid pandemic, Harish had extended his support by bridging the gap between people in need and the resources required in emergency. He also organised awareness drives so that people do not panic and also to sensitise them on post-covid symptoms.

Harish was as young as 14 when he entered politics, a field which is less chosen at that age. Keeping in mind that youth play a great role in nation-building and drawing inspiration from the present Chief minister of Andhra Pradesh Y S Jagan Mohan Reddy, Harish started his career when he was a student. He was first appointed as the District organising secretary in National Students’ Union of India (NSUI). He went on to become the state secretary and state coordinator of NSUI.

Speaking to Socio Story, Harish said, “In India, Yadav caste is one of the largest communities having their presence in a lot of states. While in some states, the Yadav community is considered as a backward class, in other states, it’s considered as an upper class. The Yadav community has a very interesting history which dates back to the dynasties of Mysore, Devagiri, Gollakonda which is now Golkonda. The need of the hour is to bridge this gap to make an inclusive society.”

In an effort to encourage the community people to become responsible citizens of the country, a separate corporation has been set up for uplifting them. The Andhra Pradesh Yadav welfare and development corporation is the first corporation in India by the Govt of AP.

Harish, 33-years-old, further said that they plan to spread awareness on the welfare schemes for the upliftment of the community. The welfare schemes and development projects such as MSME, APIIC schemes which are being implemented in the state will help the economical upliftment of the people of the community. For instance, the schemes announced by the AP CM will be implemented by the Yadav corporation which in turn will educate people of the community. The ones who are financially backward will be supported by making them self-reliant and skill development programs will be implemented for interested candidates.

Throwing light on one of the achievements by the YSRCP in which a hereditary right was reinstated by the state government (Golla Mirasi), Harish said, “The Sannidhi Golla refers to the rights of the community pertaining to certain rituals at Tirumala temple.”

A few of the projects that we plan to implement are, “Awareness drives on Navaratnalu schemes and benefits for the Yadav community, vehicle loans, empowering the educated people with skill development & helping the interested and deserving candidates to pursue higher education abroad. We would also like to sensitise the community mahila groups on the dwakra benefits and plan to provide skill development courses for self-employment which could help in setting up their own enterprise or a small-scale industry,” concluded Harish.