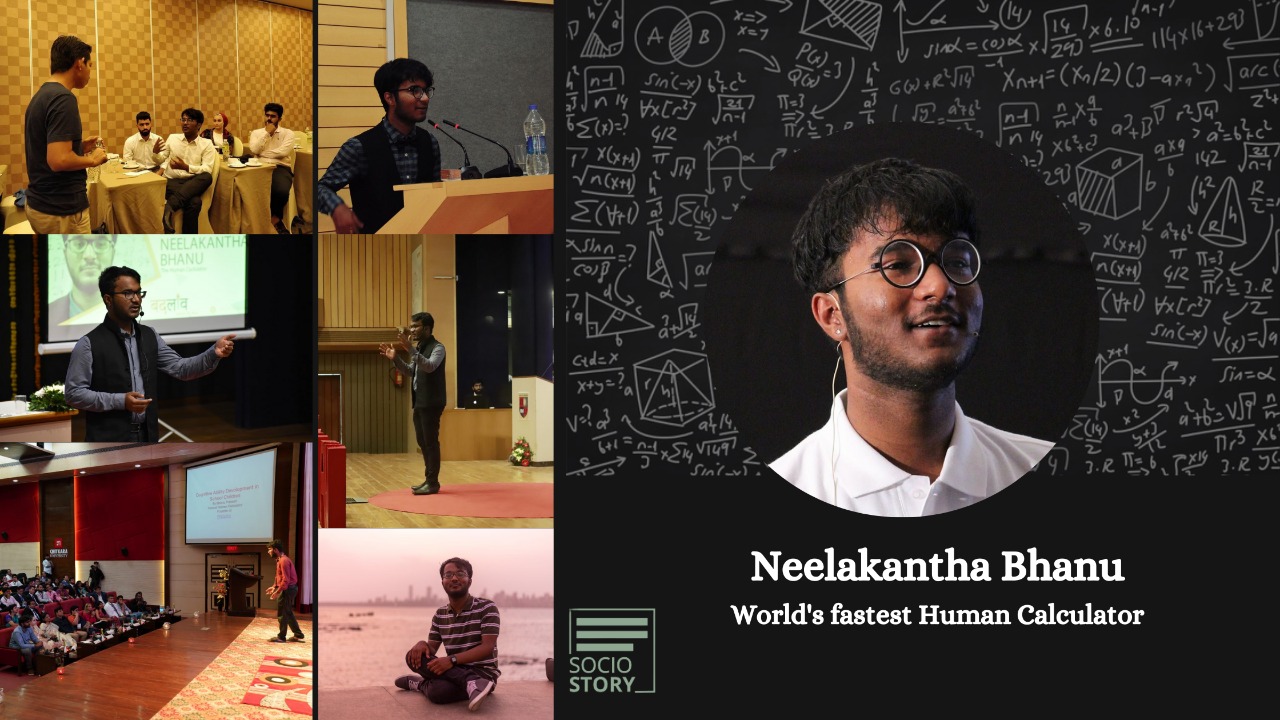 When Neelakantha Bhanu Prakash was bedridden in his childhood, little did he know that he would hold world records in Mental Arithmetic and a title of being the ‘World’s fastest human calculator’. It was exactly nine years ago, in November 2011, when Prakash won the first national championship in speed arithmetic. There has been no looking back since then. From national to international to breaking records, Prakash is now India’s first Olympic Gold medal winner. A resident of Hyderabad, 21-year-old Prakash who recently completed his Bachelors in Mathematics at St Stephen’s college, Delhi, shares his journey with Socio Story.

In 2005, an accident rendered Prakash bedridden for a year. With a major head injury that led to 70 stitches, doctors speculated whether he would have any long-term effects. However, his parents refused to believe them and encouraged Prakash to solve puzzles in an attempt to help him boost his brain. And contrary to the doctor’s predictions, ten years later, Prakash went on to break a World Record held by Scott Flansburg to become the World’s fastest human calculator. He started working on math, by initially going for regional speed arithmetic championships and tried the methods of abacus and Vedic math, eventually finalizing a hybrid model which helped him get where he is today.

After having won the national championship (2011) in Speed Arithmetic in his eighth standard, Prakash made his first attempt in the international Speed Arithmetic Championship (2013) while he was in grade 10. Bravo! Prakash bagged the first place in the international championship and made India proud. This motivated him to explore more opportunities and with a motive to share his knowledge, he started to conduct demonstrations and started to share his journey on platforms like TEDx.

“While I was restricted to being home, my parents ensured that I am engaged in some kind of mental activity. Gradually, solving puzzles and math questions gave me an adrenaline rush. It made me feel better and as I grew up, I did not consider Math as a ‘subject’ to be learnt but a ‘sport’ that trained an individual’s mind to work faster,” stated the young and brilliant human calculator.

Prakash recently won the first gold medal for India at the Mental Calculation World Championship by beating 29 competitors, up to 57 years of age, from 13 countries at Mind Sports Olympics held in London. Prakash who was recently congratulated by the President of India, has addressed conferences across 23 countries on the importance of math education in the human resource development of a country.

Speaking further, Prakash who broke the records which were once held by math maestros like Shakuntala Devi, shared insights on ‘Vision Math’- global movement he had called out for promoting the view that the ‘global definitions’ of mathematical education have to change.

Prakash who has also addressed the Common Wealth Nations, added, “Three out of every four students across the world are math-phobic. Hence, arithmetic literacy establishment is the first step towards improving a country’s mathematical competence. With this movement (Vision Math) and my start-up ‘Exploring Infinities’, I wish to promote and nurture math education in students through experiential narratives to learn math as not only a subject but as a sport and an art form.”

Stating that his mission is to make brain workouts/exercise as popular culture, Prakash who holds 4 World Records and 50 Limca Records in Mental Arithmetic, said, “During my visits to schools, I was surprised by the fact that students in grade eight and nine are not aware that ‘Multiplication is nothing but repetitive addition’. I decided to do something for them and started to work on my mission.”

Based on data and learning from the engagement of over two years with several schools including several private schools, Exploring Infinities is rolling out a mobile gaming app on cognitive ability development through math learning for classes 1-12 where students will be able to enjoy gaming and finish brain workouts while developing mental computation skills, memory skills and a better focus on mathematics.

“Exploring Infinities is venturing out as a start-up with a standard mobile app of gamified learning for enhancing cognitive abilities like - memory, sensory precision, mental computation, and long-term memories through psychology-research-backed games, learning and being inspired from my journey in becoming the World's Fastest Human Calculator,” added Prakash who represented India at Mental Calculation World Cup in 2014 and 2016 at Germany.

Prakash is already present in 5 countries and has 50+ trainers carrying global math projects impacting over 2 million kids. In his concluding remarks, Prakash said that he dreams to build ‘Math education culture’ which stresses on numeracy development, mind sports, and impact the global stance on the relevance of math education.