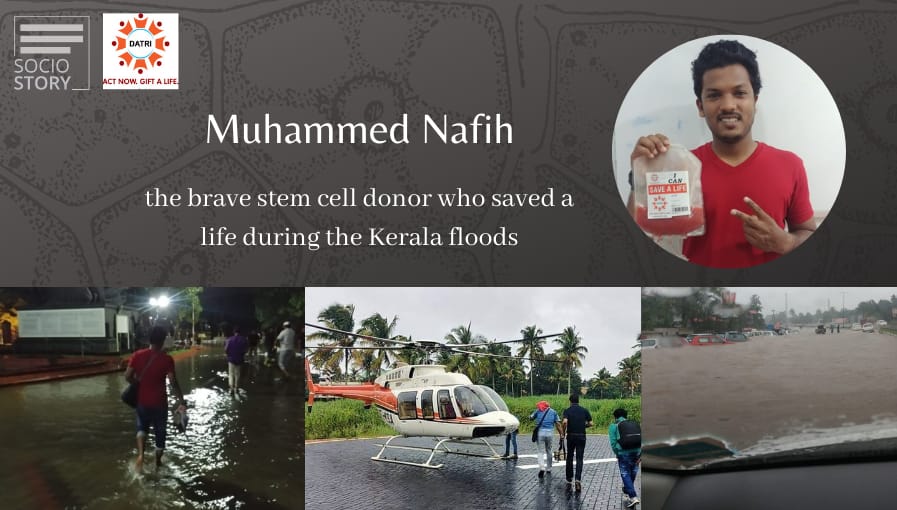 It was that time of the year when Kerala was reeling under floods and at the same time a person was suffering from a severe health condition and was in dire need of a stem cell donor. It is said that next to creating a life, the finest thing a man can do is save one. Socio Story in collaboration with DATRI brings to you the story of Muhammed Nafih, who despite the odds, was brave enough to save a life.

Muhammed Nafih had registered himself with DATRI Blood Stem Cell Donor Registry in the year 2014 when he was a college student. Little did he know that this small gesture of his will be the beginning of a life-saving act. It was in the year 2018 when Nafih received a call from DATRI informing that he was found to be a match to a 24-year-old patient diagnosed with Acute Myelogenous Leukemia in the neighbouring state of Tamil Nadu.

Nafih had readily agreed and underwent counselling and preliminary tests as per the protocol. Considering the patient’s condition, the stem-cell transplant was scheduled on August 17, 2018, at a private hospital in Tamil Nadu. The donor had to take five doses of an injection (GCSF-Granulocyte Colony-Stimulating Factor) for five days to help stimulate the production of blood stem cells.

For the first three days, Nafih was administered the dose in Kozhikode. Nafih being a relief worker was busy helping people in and around his place who were displaced due to the landslides and floods. On August 15, the flood situation worsened in Kerala and Nafih had to be administered the shot at a hospital in Kunnamangalam, his hometown, near Kozhikode. With no other option left, Nafih travelled from Cochin to Calicut which took around 5-6 hours.

Unfortunately, the patient’s condition was getting worse and most of the places in Kerala were heavily flooded. Without giving it a second thought, Nafih and the DATRI team decided to reach the patient, come what may. Although it was very difficult, they decided to travel to the hospital where the donation was scheduled. Due to the heavy floods, they were stuck at a UC college in Cochin. The college happened to be a flood relief centre and there were about 5,000 flood-affected people.

The college librarian noticed Nafih and helped by arranging a separate classroom for the donor and his friend as they had to stay away from any kind of contagious disease or flu.

DATRI co-ordinator along with Nafih and his friend stayed at the flood relief camp at the college on 4th and 5th day of the GCSF shot. Nafih adjusted with a one-time meal and spent two days. Simultaneously, the DATRI teams were trying hard to work out on the possible options to ensure the donor reaches the hospital. Finally, they arranged a helicopter and took special permission to land near the hospital with the help of Ernakulam collector Mr. Rajamanikyam who himself had registered as a potential donor.

Due to the bad weather on August 17, the donor along with his friend and DATRI coordinator got airlifted from UC College and landed near Amrita hospital. The ground floor of the hospital was flooded when the team reached. Despite the risks, the team was happy to reach on time to save a life.The transplantation was successful and the recipient has successfully recovered.