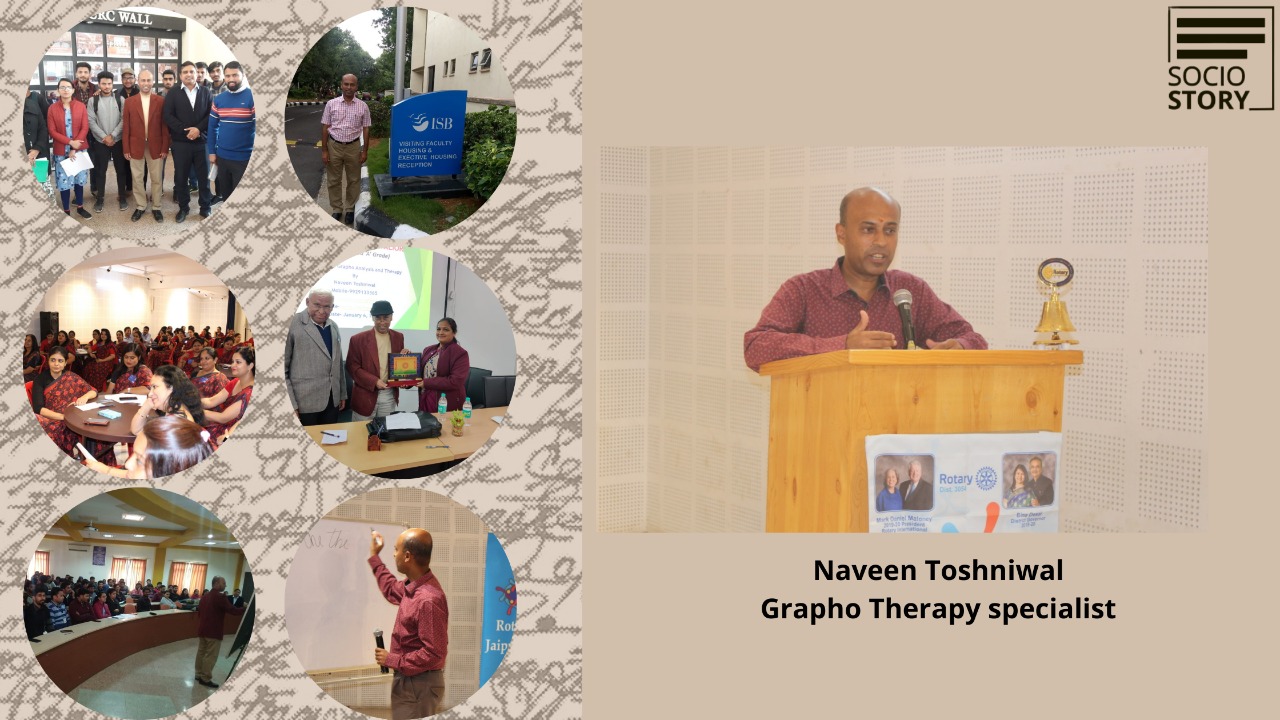 Be it crossing your ‘t’s or dotting your ‘i’s or be it the looping of your ‘l’s, ‘g’s or ‘y’s, every letter of your handwriting can be assessed and analysed to determine your personality traits. Known as ‘Graphology’, it is believed that by observing a person’s handwriting, the behavioural pattern can be revealed.

Hailing from Kolkata, Grapho-therapy specialist Naveen Toshniwal speaks to Socio Story on his journey as well as how he has helped people in developing their positive personality traits and overcoming the negative ones. After all, they say that handwriting is an imprint of the self on the page.

Toshniwal having pursued his engineering from Jadavpur University, had an interest in grapho- therapy since childhood. He inherited this interest from his father and during his college days, Toshniwal started learning it from his father. “During free classes in school, we used to sit among friends and I used to analyse their handwriting. They were amazed by the accuracy of the analysis. Some of my friends and relatives motivated me to pursue this as a profession, since the accuracy was quite good. That is how I started and developed it as a hobby,” stated Toshniwal, 52-years-old.

Toshniwal who has been pursuing his family business from the past two decades in Jaipur, further added, “My hobby slowly turned into a part time profession. The results of the analysis and therapy proved quite effective; hence I got the motivation to explore it deeper. I gradually started to practice grapho-analysis actively.”

Toshniwal started getting one-to-one clients for analysis and therapy from 2011. The first corporate invitation for an awareness session on grapho therapy was by ICICI Direct in Jaipur in 2012. Toshniwal has also given training sessions in ISB, Hyderabad and in other institutes located in Delhi, Baroda, Indore. During the lockdown, Toshniwal had organised online awareness sessions in institutes all over India, including Rotary Club, St Xavier’s Alumni Association, etc.

Sharing his view on the science behind grapho-analysis, Toshniwal who delivers talk shows over radio, said, “Grapho analysis is a 2,000 years old science. Greek scholar Aristotle was the first person to detect a link between the mind and handwriting. He believed that handwriting is actually mind-writing. If your character changes, your strokes in handwriting will also change. Similarly, if you consciously change your strokes, you will change yourself. This is the most amazing part, called ‘Grapho-therapy’.”

The grapho-analysis expert shared that an individual’s traits or character is analysed through strokes in the handwriting. This includes the slant of letters, size of handwriting, the style of various letters, the pressure etc. “Changing a few strokes consciously after detailed analysis can bring a change for a lifetime. All you need to do is practise the prescribed strokes for only 5 minutes a day and the desired changes can be obtained in about 3 weeks, provided the practise is done sincerely,” said Toshniwal.

Be it for corporates/placement consultants, parents/teachers/students, or self-improvement, grapho-therapy is said to be helpful. This helps in understanding one’s positive traits and to get over negative traits. Although, the scope of grapho therapy needs to be realised in India, it is said to be helpful in overcoming serious conditions like depression and suicidal tendencies.

Sharing one of his experiences, Toshniwal said, “A young girl in early twenties, was referred to me by a counsellor. The girl visited me with her mother, and she refused to even lift her head when I was trying to talk to her. When I did the analysis, I found strokes of depression coupled with dangerous strokes of suicidal tendencies. This was a sensitive issue, and it was not possible to tell them directly. So, I asked the girl to do the therapy and stressed upon changing that particular stroke. For the first few days, she did not start the therapy, but on follow-up by me and the counsellor, she started doing the therapy. I was in regular contact with her and ensured that she did the practise 5-minutes a day by changing the desired strokes in handwriting. When she came to me after a month, I saw a marked change in her nature when she wished me by saying `good morning sir’. This was a big change, from the initial condition where she was not even able to lift her head to communicate. Today she is working and doing well.”

Toshniwal has been trying to generate awareness about this subject to a large extent and has been utilising his knowledge to help others. Toshniwal plans to tie up with a couple of educational institutes in India to teach grapho-therapy.