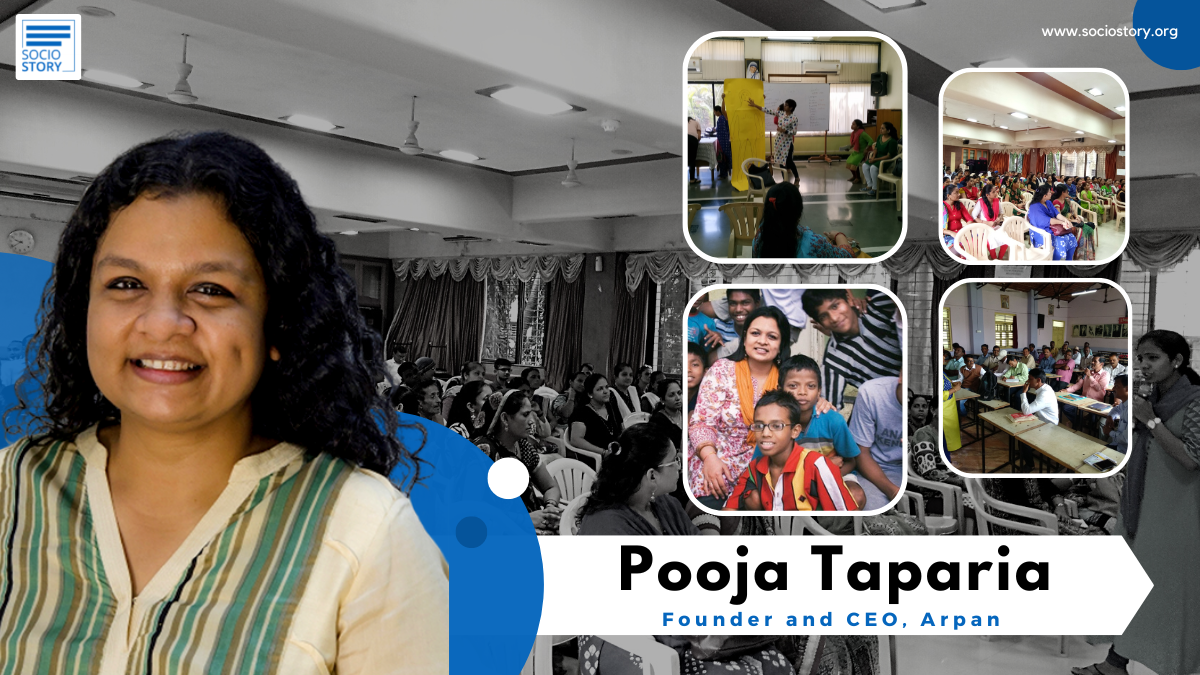 True to the name of the organisation, Arpan, which means "offering" or "sacrifice" in English, the organisation has had a huge impact on the society. Pooja Taparia, the founder, and CEO of Arpan, is the lady responsible for this enormous impact and has been working in the field of Child Sexual Abuse (CSA). Pooja, who is the great-great-granddaughter of Jagannathji Taparia and hails from Nagaur in Rajasthan, was raised in Mumbai. For more than a century, the Taparia family has been very entrepreneurial and philanthropic.

Arpan is a globally-recognized, award-winning NGO working toward eliminating Child Sexual Abuse (CSA) in India. Based in Mumbai, with a team of over 120 dedicated professionals, Arpan is India’s most prominent NGO providing CSA Prevention and Intervention services for both children and adults. As a critical stakeholder for state and non-state actors, Arpan is a leading voice in the space of CSA Prevention and Intervention in India. It uses advocacy and research to push for policy and systemic change at the local, state, and national levels.

The turning point in Pooja’s life came in 2003 when Pooja attended a function led by her Guru (spiritual guide), Pujya Bhaishri Rameshbhai Oza who spoke intently about “the attitude of doing Seva (service)”. Post the function, Pooja gathered a small group of like-minded friends and immediately set up a group called Arpan. She called it Arpan – Making Little Differences with the idea of bridging the gap between the privileged and underprivileged groups in society.

Arpan began its activities by encouraging motivated and mobilized individuals from the civil society to volunteer their time and money towards charitable activities, such as providing woollen clothes and blankets at old age homes, donating sports equipment for children in orphanages and conducting Diwali parties and fun fair for special children

While Arpan continued with its philanthropic focus, the second important milestone in Pooja’s journey came in 2004, when Pooja was highly influenced by a play on child sexual abuse, which gave her a new vision and direction for Arpan. The play depicted the trauma faced by a survivor of sexual abuse as she carries on with her life, makes decision/s, develops relationships and the fears/crises she experiences in her everyday life. The play shook her from the core.

The understanding that children are violated (the violation of not only the child’s body but the trust implicit in the caregiving relationship); and the revelation CSA can bring in psychological trauma from childhood which may disturb a person in his/her everyday experience of self and others and restrict possible thoughts, actions, and feelings if not supported and healed at the appropriate time; unsettled her.

Emotional reactions to child sexual abuse are to be expected and are not unique in themselves. But what makes Pooja stand out is her determination to repudiate living with this reality and her conscious effort to do something about it. While many who watched the play on that very day would have either grappled with the realities either by not acknowledging it or by acknowledging it and feeling helpless, Pooja vouched to take it ahead and deal with the issue of Child Sexual Abuse. She felt that this nuanced multifaceted issue must be brought to the forefront as it operates via a complex matrix of behavioural, emotional, social, and cognitive pathways.

With a pledge to address an issue which generally goes unnoticed, silenced (more so when it occurs within the sanctuary of home by someone the child knows and trusts) and poorly intervened and is also not the focus of the development sector (despite the grim statistics only three organizations were working on the issue in a structured manner), Pooja started looking for individuals/organizations who can support her.

Since 2007, Arpan has impacted over 2 million children and adults across different socio-economic and cultural backgrounds. On being asked on the impact she wishes to create, Pooja stated that she would like to see every child in India empowered with personal safety education, every parent and teacher trained to prevent CSA so that we can reduce the instances of sexual abuse.

Arpan was officially registered as a Charitable Trust in March 2008, after which there was no looking back. Post registration, Pooja has invested a lot of resources and time in networking and connecting with experts on a national and international level to develop a more structured and sustainable model of dealing with the issue wherein the focus has been on empowering children as the primary stakeholders. In 2008, Arpan was able to establish a strong and long-term association with Ms Lois Engelbrecht, who has 18 years of work experience in the field of child sexual abuse to support Arpan to develop a sustainable model of prevention services. She has also been a part of the pioneering work of developing the Personal Safety Education Project for schools, which Arpan has adopted and contextualized for the socio-cultural set-up in India.

Pooja firmly affirms, “The silver lining is that though effects of child sexual abuse can be damaging, they need not be permanent. With counselling and alternative forms of therapy, child and adult survivors of sexual abuse can be brought into a process of healing and recovery and over a period can leave their past behind and enjoy their present life.”

Pooja’s journey began with a team of 2 in the city of Mumbai, empowering children with personal safety messages, stopping abuse, healing victims, and training adults to protect children. She has gone on to build one of the world’s largest non-profits addressing the issue of Child Sexual Abuse with over 120 professionals dedicated to training children and adults across India. She has turned Arpan into India’s leading voice in Child Sexual Abuse Prevention and Intervention and a globally recognized award-winning program that has impacted 2 million lives to date.

She is a visionary leader who has demonstrated the ability to build a prominent, passionate, and committed team and an impactful, resilient organization doing excellent work in this space. Pooja has paved a path of transformation and scale where there was none.

It was hard to break the silence on the issue or get people even to acknowledge it in the initial years. People would most often be shocked when they used to hear the statistics of CSA and how much it was happening in India. There was also an attitude that this happens in slums and not in our homes and schools. Getting to break that mindset was hard, but things have changed over time. Thanks to increased media reporting, there is more acknowledgement of the issue and organizations, schools, and the govt. are recognizing and trying to act on it, said Pooja.

She further added that the other challenge is the magnitude of the issue. While Arpan is trying to make a pan-India impact, the sheer number of children and adults we need to train and create awareness with is massive and sometimes feels overwhelming. No matter how much we have achieved in the last 16 years, it still feels like a drop in the ocean.

Healing through counselling is an essential aspect of dealing with Child Sexual Abuse. Even today, there is little understanding of why counseling is necessary. Parents do not feel the need to provide counseling and therapy and think the child will forget, but the reality is that no child/adult ever forgets. The impact of CSA can remain a lifetime and continue to affect an individual emotionally, psychologically, sexually, and physically unless healed.

There are countless stories of courage, resilience, and strength that we have seen in children and that has been very inspiring. We plan to train teachers across the country to reach 200 million children to empower them with personal safety education so that we can prevent Child Sexual Abuse (CSA). In her concluding remarks, Pooja said, “We also plan to train all counsellors and psychotherapists to address cases of CSA so that survivors can get appropriate healing services.”