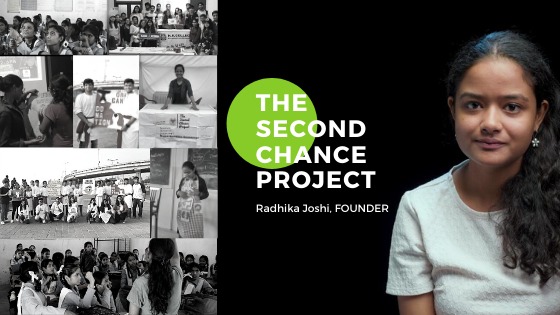 After losing a loved one to an organ failure, Radhika Joshi conducted extensive research on organ donation in India at the tender age of 17. During the research, she found out that about 5 lakh individuals in India lose their lives due to the unavailability of organs every year. She also realized that the organ donation rate in India is extremely poor- only 0.26 percent per 10 lakh people donate their organs due to ancient beliefs and lack of proper knowledge about organ donation. With 1 per million-donation rate,

India would have 1100 organ donors or 2200 eyes, 2200 kidneys, 1100 livers, 1100 pancreas, and 1000 hearts. This should take care of almost all current demands for organs. For someone who always wanted to bring about a change in the world, the urge of doing something about the issue took over her and at the age of 18- she founded

The team members are geographically spread across the nation and all of them are very dedicated towards the cause, as they believe in second chances for organs that perish along with each individual. They manage research, technical and web-related aspects, social media and management of events, along with volunteering.

At present, they have started youth-led chapters in Uttarakhand and Maharashtra, and are planning to expand across India by involving more young people. Since day one, Radhika has had the support of her family. However, they were a little apprehensive about Radhika working for a cause like organ donation, as there were various news about organ trafficking  and kidney rackets in media. Later, they understood the need for such a programme and have been the backbone of the venture along with her team members.

Radhika’s ability to empathise and her entrepreneurial spirit was recently recognised by the Ashoka community. She is currently part of the world's largest network of Social Entrepreneurs and Changemakers as an Ashoka Young Changemaker. In India, it has been estimated that more than a million people suffer with an end stage organ failure, but only quite a few as 3,500 transplants take place annually. At the very least, about 15 patients die waiting for organs every day and in every 10 minutes, a new name is added to the waiting list. Undoubtedly, the demand for organs is far beyond its availability.

A cadaver or deceased donor can save upto 9 lives, but despite this, organ donation is a neglected issue. Some the major reasons why organ donation lags in India include lack of family consent even when the patient is declared brain dead which is irreversible even if the organs continue to function. This is what drives doctors to urge the family of the deceased to donate the organs and save someone’s life. People in India also believe in thousands of myths and misconceptions which prevent them from pledging their organs. Also, the lack of organ transplant and retrieval centres especially in rural areas, is a serious hindrance in India. Not all hospitals are equipped to carry out the process of organ transplant and retrieval.

The platform primarily conducts sessions with youth from schools and colleges. They have also conducted Meet-Up events in cafés, to start a conversation about organ donation in an informal setting and bring out the positive aspects of this cause! To engage young children, they design ‘organ donation aprons’ by reviving simple household kitchen aprons with colourful drawings of body organs which can be donated, to highlight the importance and function of each organ. To adapt to the current lockdown due to the COVID-19 situation, they are using online platforms to conduct awareness sessions and continuing to work towards this cause.

Within 23 months, they have sensitized 1500+ individuals and registered 300+ individuals to become organ donors through various online and offline awareness drives as well as workshops. Organ donation is a life-giving process and a decision to donate organs can not only change someone’s life, but also have an impact on people associated with the individual waiting for an organ. Radhika’s efforts are undoubtedly saving lives!