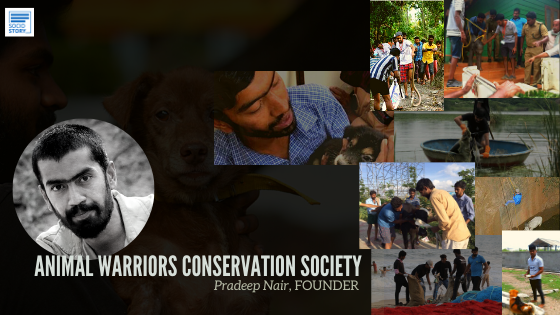 Pradeep was just another animal lover until the day when he saw a monkey near his window trapped in a tree at 60 feet height, and he couldn't help the monkey himself. He called NGOs and rescue teams to get the monkey out, and the entire process till the final rescue took around 2 hours! For almost 2 hours the animal was in severe pain. Pradeep felt miserable on his part for not able to save the monkey himself, he knew if he had an idea of how to save animals it would take him only minutes. It was then when he decided to do something for animals.

Pradeep Nair is the founder of  Animal Warrior Conservation Society, an organization aimed towards saving and rescuing animals trapped in danger, and along with it they also work for the conservation of the environment. They function under three areas namely, Rescue (of animals), Conservation (of Environment), and Spreading Awareness (regarding the safety of both).
After completing his B.Tech he came to Hyderabad and joined a company as a senior software engineer. He realized that there are NGOs working for animals, animal lover as he was, he joined these NGOs too and started working actively there as well. Now as we know we can’t sit on two boats at once, thus, as the pressure of the job skyrocketed, he was told to choose either his job or his passion for saving animals. Being an excellent human being and without giving second thoughts he left his job and shifted his focus completely on animals and the environment!

Working with NGOs he found a big gap between the NGOs and the needy, they were lacking time, resources, and people. They can’t run everywhere. This clicked Pradeep with an idea of starting a channel were animal lovers can pool up and voluntarily save animals. It was then when he became an animal activist. He focussed on training these volunteers on how to perform rescue activities of animals trapped in severe conditions. Like a cat who fell into a borewell, 6 feet wide and 60 feet deep, or a cow who fell in a river and is trapped. Fishes trapped in the sea who get entangled in plastics or birds who get stuck in manjha (nylon thread) on trees at 50-60 feet height. These require a tactical approach to saving them by safety harnesses and other engineered methods. Started with 7 people they are now a total of 500 volunteers working for his organization and few have also started their own smaller groups focussing on the same! He also clubbed up with wildlife rescue teams to ensure best practices in his organization.

They also conduct seminars in schools and colleges to spread awareness. They recently started a new campaign called “Mowgli Walk”, in which they take children to jungles and parks for a walk. This helps children to learn about wildlife and the environment, different trees, their uses, etc., they also distribute sparrow houses and water bowls to people for free, to boost them to encourage conservation of wildlife and especially sparrows as they have been extincting. Along with this the team has saved 500 animals during the Kerela disaster, and cleaned Osman Sagar lake at Hyderabad to take a step further towards protection of environment.

The love for nature and wildlife comes from within. Pradeep has been saving animals since he was a kid. His father use to tie a school bag in top of a tree for birds to reside in. Since then there has been no turning back for Pradeep. Through SocioStory he wants people to know that saving animals and environment is no rocket science. Anyone can do it and everyone should do it.

“No matter how few possessions you own or how little money you have, loving wildlife and nature will make you rich beyond measure.”
― Paul Oxton