Meet Zoyeb, an Ataxia Warrior who believes ‘Possibilities are everywhere’ 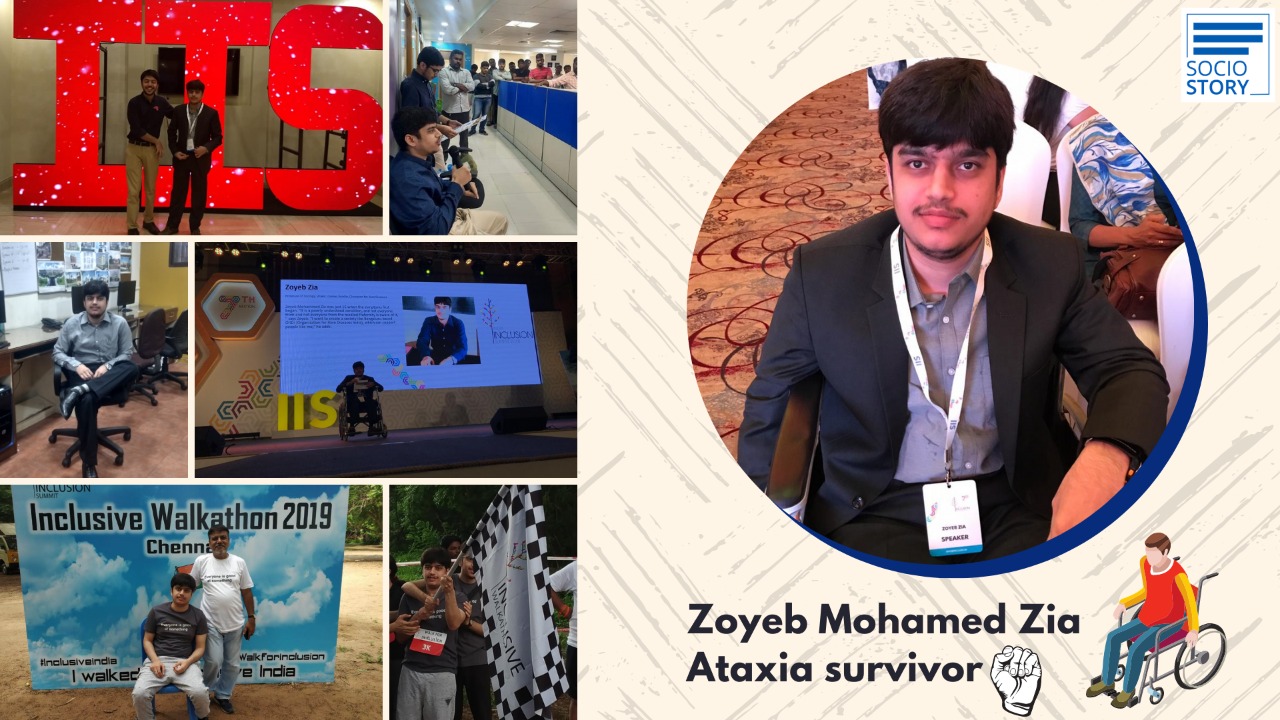 When Zoyeb Mohamed Zia was in grade twelve, little did he know that the differences in his body and limb movements would lead to a rare Neurological disorder called Ataxia. Until grade eleven, Zoyeb was an active, jovial and fun-loving person, good at both academics and extracurricular activities. However, Zoyeb suddenly faced a situation where he started noticing poor co-ordination of his hands and legs. Also, a bad fall during a game of football, where he lost balance while kicking the football, made him aware that something was wrong.

Things became a little more difficult as days passed. He was soon dropping things and was beginning to lose balance when he was walking in open spaces for long distances. The doctors suspected the symptoms to be an onset of a rare condition. After a few visits to different doctors and hospitals and tests, it was confirmed that it was a case of Ataxia.

Ataxia is one amongst about 7,000 known rare diseases worldwide. It causes poor coordination of limbs, affects gait balance and slurs the speech. It is progressive and degenerative disorder – currently with no cure or medications to slow down.

Zoyeb was finding it difficult to walk without support, and soon his father became his full-time support to hold him and take him to the classes. A year when students have exams pressure, Zoyeb who was in grade twelve was going through a period of additional physical and psychological pressures. In the initial days, he had drifted away from his friends, his family and all other activities. He had come to the verge of giving up his schooling due to physical disability.

Thanks to his support system including family, friends and teachers, Zoyeb cleared his board exams and garnered the strength to face the difficulties. Zoyeb continued to pursue his education and opted for BSc Zoology. Although his college was supportive, the infrastructure made things more difficult for him. He continued climbing up and down the stairs with his father’s support. However, it did not deter him from pursuing his higher education. He continued to finish his MSc and MPhil in Zoology in the same college, and also did a BSc in Psychology via correspondence. He believed that education would play an important role in his future roles and for better career opportunities.

Zoyeb who currently works as an Assistant Professor of Zoology in Chennai, said, “I developed an interest for teaching as a profession, while research was my career goal. I cleared SET (State level Eligibility Test) competitive exams, which qualifies one for a professor’s post. When there was an opening in my college in the Zoology Department, the college encouraged me to apply for the same. It has been four years now that I have been an Assistant Professor of Zoology. I would soon start my PhD as well.”

Both Zoyeb and his father volunteer in Rare Diseases and Disorders segment and PwD segments, trying to raise awareness on the prevalence of rare conditions, and also to promote the need for inclusion. They understand the difficulties and challenges that persons with rare conditions face, hence they work towards connecting the persons and their families with the right support and help groups.

Lack of registries, lack of a rare disease policy and lack of awareness make things very difficult. Financial strain, social stigma and at times job loss makes it difficult for the families to come back and connect with the mainstream of life.

There was a time when Zoyeb had cut himself away from the circle. Luckily, he soon realized that this would neither help him or others. He believes that his acceptance of certain truths, gave him more strength to face realities. This gave him the courage to speak about the difficulties he faced. He developed a keen interest to motivate others. He was soon speaking on different platforms, at schools, offices and events. He was keen to motivate others, mainly students who face the same or similar conditions like his. He became actively involved in groups and organizations working in Rare Diseases and Disorders – mainly Ataxia. He is also a co-founder of an organization called ORND (Organization of Rare Neurological Disorders).

In an effort to create awareness and connect persons with right groups and resources, ‘Possiabilities’ was started by Zoyeb’s Dad Iftikhar Md Zia in 2020 during the lockdown period. Zia had met so many interesting persons that he wanted to highlight their stories and achievements in order to encourage/motivate others. He started Possiabilities, mainly to share positive stories and articles from Rare Diseases and Disorders segments and PwD segments. The other modules planned include an E-commerce site and a virtual platform for products and services connected with these segments.

Zoyeb is keen on pursuing his PhD while continuing his teaching profession. At the same time, he plans to pursue his interests and connect with more persons, organizations and researchers from the Rare Diseases segment, and expand his role in India through Possiabilities.