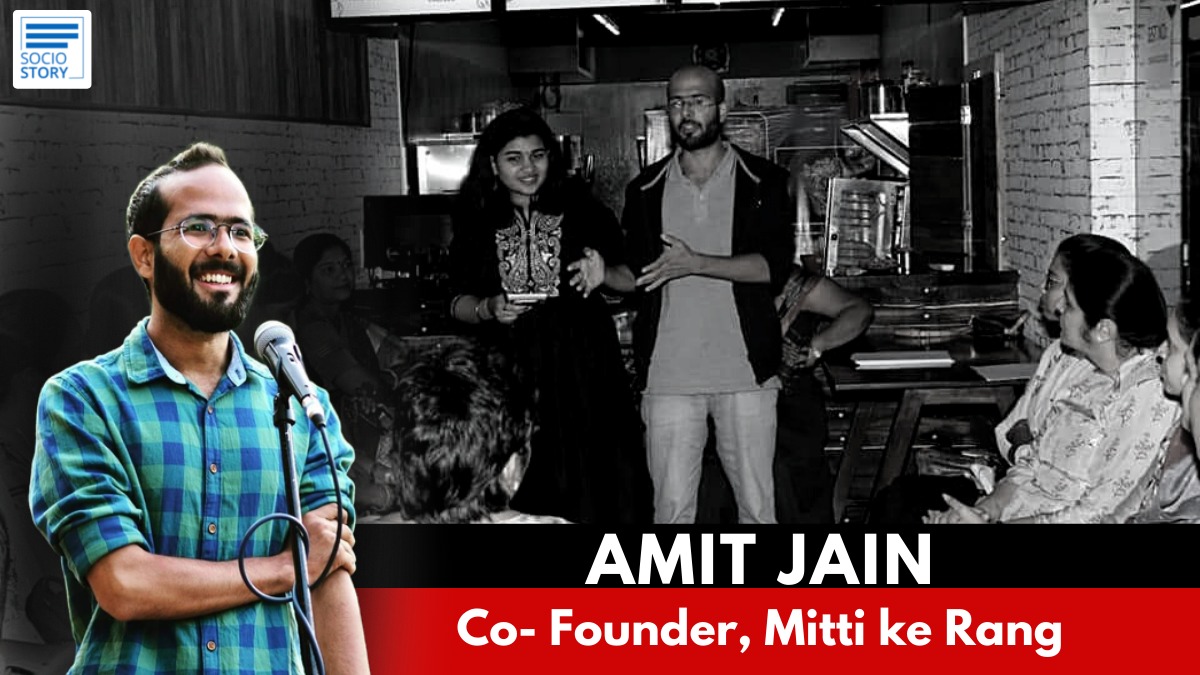 The Covid pandemic disrupted the lives of thousands of people as many of them lost their livelihood while others were laid off. Media reports also state that more women lost jobs compared to men during the pandemic. In what can be called as a silver lining, Amit Jain provided an opportunity to the women entrepreneurs to earn their livelihood despite the challenges posed by the pandemic. Socio Story brings to the fore the journey of young entrepreneur Amit Jain and his social enterprise ‘Mitti Ke Rang’.

Hailing from Maharashtra’s Bhusawal, Amit lost his father when he was three, and then, his grandfather had opened a tailoring shop for his mother. Amit was supported by his cousins which helped him to survive. After doing his B. Com, Amit landed in Pune in 2012 with INR 1,000 to look for a job. And after a month’s struggle, he got a job at The Bank of New York Mellon. Life changed drastically, henceforth. In 2014, Amit started a social group along with his friend Saket Deshmukh. The main idea at that time was to collect clothes from people who wish to donate and distribute these to the NGOs and slum areas. Amit wanted to support the marginalised communities and slowly, he was able to extend support to such people along with the volunteers. They then named their group as ‘Mitti Ke Rang’. For a couple of years, along with their full-time jobs, they kept doing various social activities which brought a positive impact in the society.

In 2019, Amit left his bank job to give ‘Mitti Ke Rang’ (MKR) his full time and attention. At that time, Amit and his friend realized that they have many women in the community in Pune, looking for opportunities to earn a livelihood. Gradually, Amit’s team started training women entrepreneurs to make cloth and paper bags. While word of mouth spread, they got a few orders which helped them make more products. In September that year, as Diwali was approaching, they added tea light candles and it was a great hit. They sold 52,000 units in 40 days which generated Rs 17,500 each for five women entrepreneurs. Indeed, it lit the lives of women.

After that Diwali, Amit decided to backpack across India, to meet women entrepreneurs across rural areas to understand the women entrepreneur ecosystem and challenges they usually face in their businesses. “I had a plan to backpack across India covering Kanyakumari to Kashmir, Arunachal Pradesh to Bombay. I started from Mumbai and went till Kanyakumari and then till Arunachal Pradesh. After which the lockdown was imposed and due to which I got stuck in Guwahati for 70 days,” reminisced Amit adding that during this journey, he met a lot of women entrepreneurs in different cities.

Amit, 30-years-old, further said, “On interacting with these women, I had understood that many women want to start their own business but using technology and social media as a means to promote and sell their products posed a big challenge. We pondered over the thought that we already have a platform, so why not assist all such women entrepreneurs with the platform to ease the process and help them get the customers from across the globe.”

Although Covid was a hurdle, MKR started full-fledged operations only at the end of December 2020. They started circulating forms to women entrepreneurs who wished to register their products on their e-commerce site. Many of them started the business at home as an experiment and now they are looking at making it mainstream by expanding it.
After starting the initiative of an e-Commerce platform for women entrepreneurs, more than 5,200 orders were received in one year. More than 200+ women entrepreneurs from 25 states in India were onboard on the platform. The products were shipped to more than 250+ cities, and 5 countries.

Sharing his challenges while he transitioned from a corporate to an entrepreneurial role, Amit said that it was quite difficult when he decided to leave his full-time job for investing time in Mitti Ke Rang. “I remember telling my family that my company is kicking me out. Because they would never agree to the fact that coming to Pune with INR 1,000 and then leaving such a well-paid stable job at the age of 28 is a wise decision,” shared Amit.

Amit’s future plans are to onboard more women entrepreneurs from different parts of India, help them scale their products internationally, get more orders and generate livelihood. He wishes to build a tight knitted network of like-minded, entrepreneurial women. He also wishes to start a fundraiser for women entrepreneurs for capacity building, buying raw materials, product packaging, warehouse, education for their kids and giving more employment to women in their locality.

The young entrepreneur, in his concluding statement, said, “You have one life- Take risks, Hustle and Find your purpose.”