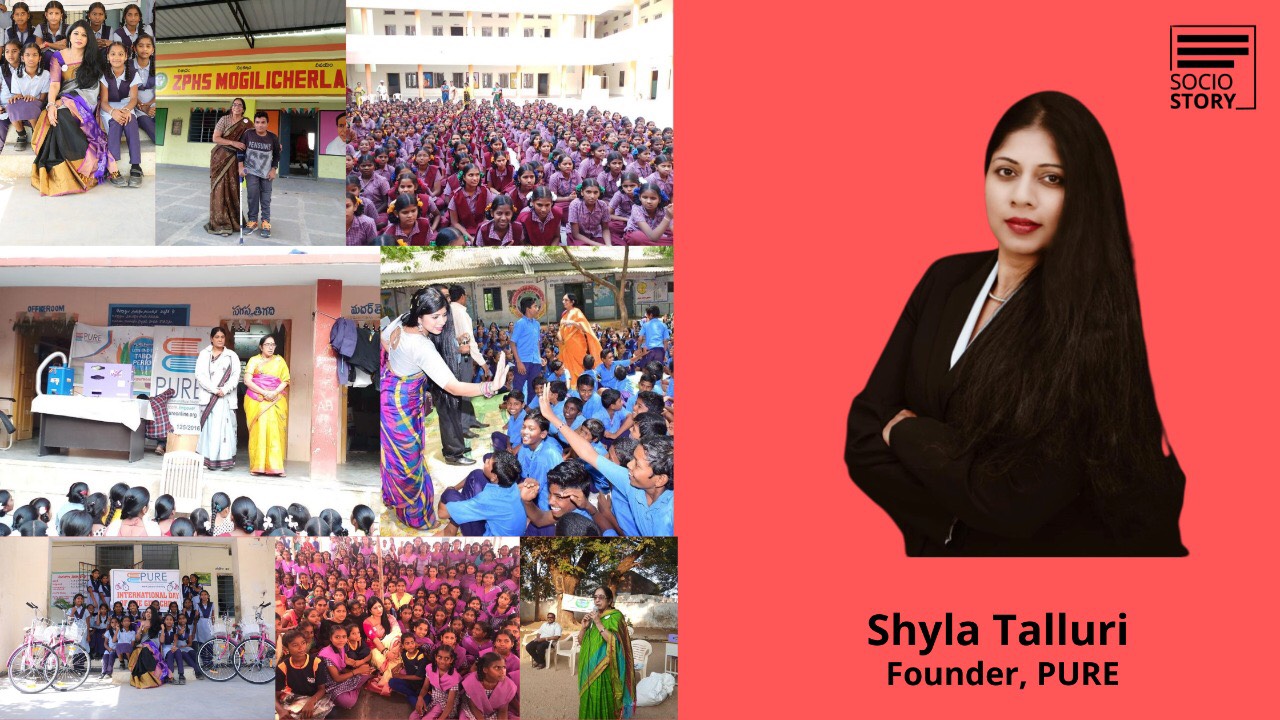 It was one of the days in February of 2016, when Shyla Talluri received a call late at night from India. The call was to inform the state of affairs of a public school in the remote forest area of Khammam district of Telangana. The school that served poverty stricken tribal kids in Bhasitnagar hamlet needed many things out of which notebooks were on the top of the list. In a bid to help, Shyla, along with her elementary school classmates decided to pool funds and extend their support by providing notebooks for 205 children. But, after some time, the phone rang again to ask her if she could donate towards providing plates for children. Sitting comfortably in her suburban home in St Johns Florida, she said, “how much more will you ask, I already said yes to books, pick one”, informed Shyla Talluri.

While Shyla slept peacefully that night, little did she know the state of the public-school system in India. The next morning on the way to work, she was curious and called back to ask what the plates were all about. Thousands of miles away from her, she later learnt that students were asked to choose between lunch plates and notebooks.

“I was told that more than half of the school children survive on the free meal served at school, the only meal they get to eat most days. But they chose EDUCATION over FOOD. The school hardly had forty plates to serve food to the famished children. Younger children who could not wait for their turn resorted to eating the watered-down stew on the same plate at the same time. That was it, the life as I knew it had changed. My childhood pals and I raised funds to completely transform the school. A school a few miles away reached out for support, making me think why not help more children, the children who chose Education to lift themselves out of poverty knowingly or not,” added Shyla.

The thought of giving back to the underprivileged gave birth to People for Urban and Rural Education (PURE). It came into existence officially on March 17, 2016, three weeks from the first phone call that woke her up to the harsh reality of children’s lives and the weight of poverty they shoulder. PURE is on a mission to address the urgent needs of the world’s children - one child, one classroom, one school, one student, one village at a time for the past four years. The vision remains unwavered - Education to Empower children and youth.

The goal of PURE founded by Shyla Talluri and co-founded by Archana Purini and Vijay Ramireddy with the support of Sandhya Gollamudi, Deepa Kamlakara, Hema Kanthmneni is to address the insufficiencies in disadvantaged schools to ensure quality learning experiences, to bring students from diverse socio-economic and geographical backgrounds together for a better tomorrow and to ensure that no one is excluded from education due to poverty, gender, sexual orientation or religion.

Their efforts sped up as requests poured in from schools in villages near the first school. Then from schools far away and villages even more remote – villages by the sea, rivers, hills, valleys and forests. The requirements all had the same things; neglected schools with roofs leaking, lack of access to drinking water, toilets, benches, school supplies and other amenities that we take for granted. There was another common thing too, the children who chose Education as a weapon against poverty! The projects of PURE expanded as they transformed and adopted public/ govt schools in Telangana, Andhra Pradesh, Kerala, West Bengal and Uttar Pradesh. The infrastructure improvements of these PURE schools were also taken care of apart from facilitating quality learning environments

After a few months, it was time for PURE to design programmes that would empower the girls and young women. Thus, started the mission PURE Femme, a menstrual hygiene awareness programme which focusses on period poverty in five countries - USA, India, Ethiopia, Uganda, Nepal. “We have reached 1,40,000 girls in three years through workshops (during Covid its being done virtually). We have also set up sanitary napkin manufacturing units to create livelihood as well,” said Shyla.

She further added, “The girls who hug and cry during menstrual hygiene workshops by sharing the trauma they go through because of menstrual problems  (lack of awareness, taboos, stigma, lack of facilities in schools like toilets and running water, privacy , access to pads, nutrition) keeps me motivated to set the playing field for our girls.”

The other initiatives include; PURE Sponsorships - Sponsoring a child’s educational/living expenses to help ease the burden of poverty, PURE Smiles/Scholarships - Addressing the day to day needs (uniforms, groceries, bicycles, wheelchairs, crutches, etc) of the children that cause a hindrance to their education, PURE Green - Plantations and kitchen gardens at schools to spread the green initiative and create a sustainable environment for children and PURE Abhyasa - A school for the street children, the panhandlers and rag pickers.

PURE is now spread in India with a focus on (Andhra Pradesh, Telangana, West Bengal, Tamil Nadu, Kerala, Karnataka and UP), in Ethiopia – (Simien mountain region) and USA (Direct Services in Florida, Georgia, Texas and New Jersey.) One of the future plans of the PURE team includes setting up a Mobile school to help the migrant labour children and street children getting an education.

Some interesting facts on PURE:

❏ More than 100 Mineral water plants have been installed in schools to provide safe drinking water for the children.

❏ 1000+ benches have been provided to schools to help move children from floors.

❏ 32,000+ notebooks supplied on a yearly and need basis. This is a continuous project.

❏ 220+ bicycles given away to children for scholarships and to ease the burden of walking long distances to reach school.

❏ Abhyasa (school for street children) - one in Tanuku, Andhra Pradesh. Two more are getting ready in Hyderabad, Telangana.