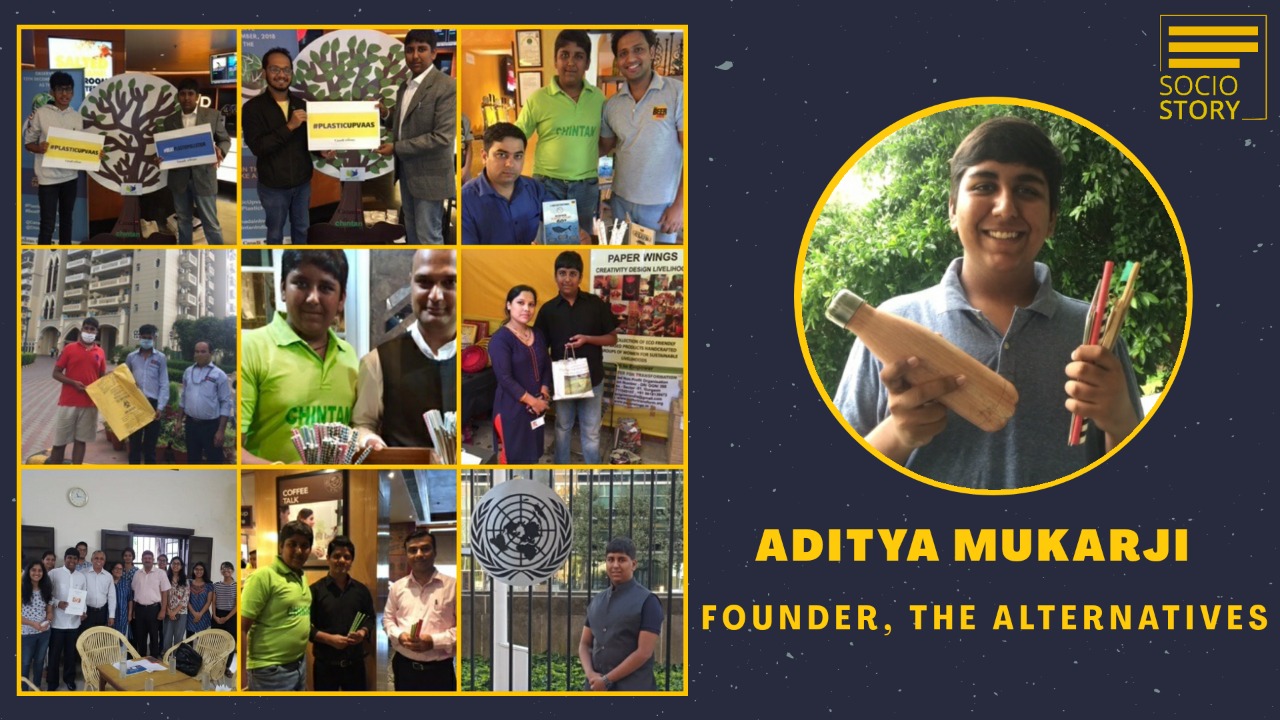 When 13-year-old Aditya Mukarji was watching a video on YouTube, he was horrified and taken aback. While teenagers of his age are either glued to video games or social networking apps, there was something else that interested Mukarji. The video that Mukarji saw showed a doctor pulling out a plastic straw from a turtle’s nostril. This video remained etched in his mind and from that day on, Mukarji, without giving a second thought embarked on a mission against single-use plastic.

And the journey of this teenager began. After watching the video, Mukarji started researching about single-use plastics, its harmful effects, the waste being generated by it and the pollution being created by it. To find an answer, he gradually also started to research on what could be the possible alternatives of single-use plastic.

“What else can be more disturbing to witness the ill-effects of plastic on the entire ecosystem? Plastic has become so cheap that it has become part and parcel of human lives. For most of us, the day starts and ends with the usage of single-use plastic. However, there are a very few people who have adapted to a sustainable lifestyle which includes carrying essentials (cloth bags, steel bottles/coffee mugs, etc) along with yourself and discouraging use of single-use plastic”, stated Mukarji who is a volunteer with the NGO Chintan Environmental Research and Action group, and an intern at UNDP India-Plastic waste management program.

Based in Delhi-NCR region, Mukarji (16 years) is a grade-11 student at the Shri Ram School, Aravali, Gurugram. Mukarji started two campaign initiatives: ‘Refuse If You Cannot Reuse’ – against single-use plastics. Under this campaign, Mukarji promotes/ advises establishments on the eco- friendly options they can use and connects them to a few major suppliers of the same in India.

In 2020, he started an urban reforestation initiative called ‘Forests of Hope’ to grow 195 native trees; one tree symbolic of the children of each nation of the world. 195 nations in the world thus 195 native trees. The essence is to encourage people to grow trees with a mission to spread the message of hope for tomorrow by the youth of today.

There is an urgent need for people to understand the harm caused by single-use plastics. The harm is not only to the planet but also to the human body through the micro-plastics and nano-plastics entering our system via the food chain, sea salt, water and now in some places there is also evidence of ‘Plastic Rain’. There are so many items that people use or consume in their daily lives that leak out millions of micro/ nano plastics –like tea bags, face wash, glitter cosmetics and paints, etc.

“Each one of us have to understand our ‘Individual Social Responsibility’ towards our environment. We need to make positive sustainable changes for our future and the future generations to come. Every small change at the micro level will lead to a big change at the macro level,” shared Mukarji.

Sharing the impact that has been created through his initiatives, the young boy said, “I have been able to eliminate over 26 million plastic straws and few million other single-use plastics from consumption by encouraging and helping establishments to switch from these. I have also advised a few corporates to remove single-use plastics from their offices and factories by organising awareness campaigns for the general public at malls, markets, and residential societies.”

Mukarji also ensures to spread awareness about the need for segregation of waste at source. “Even during the lockdown, I have been encouraging youth and fellow students of my school, to give up single-use plastics, advising them on alternatives they can use, and also encouraging them to influence at least 5 others in their family or friends to do the same. I have initiated an e-certification program at my school to encourage students to take climate action,” added Mukarji who was invited to the UN Youth Climate Action Summit in September 2019 by the UN Secretary General.

Mukarji has co- founded a Facebook page The Alternatives with the purpose of promoting harm reduction to people and the planet. This young changemaker wishes to encourage more and more youth to take positive climate action which will result in quantifiable results for the benefit of our planet. “I have plans to spread this to few rural areas, through incentive programs and awards for the poor children, which will have a dual advantage of benefitting the planet as well as the poor families,” concluded Mukarji.