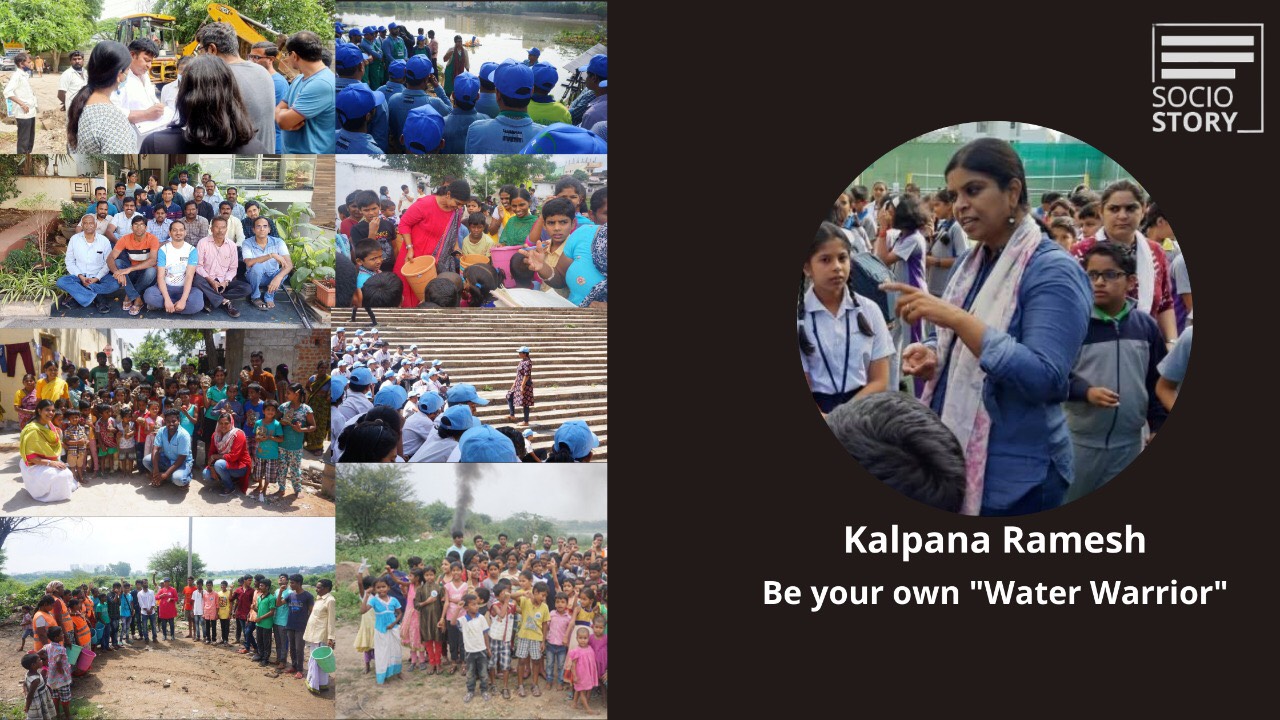 When Kalpana Ramesh and her husband decided to move back to India in the year 2000, they chose to settle in Hyderabad. Kalpana then witnessed first-hand, the cities being dependent on water tankers which bothered her a lot. That’s when they decided that when they build a house, it would be a water tanker-free house. A sustainable idea, isn’t it? And this set the journey of her being a ‘Water Warrior’ in motion. Her efforts did not end at her doorstep as she worked to make the residential community and the city less dependent on water tankers. Today, Ramesh leads Water Initiatives for SAHE (Society for Advancement of Human Endeavor) a Hyderabad-based NGO.

The rainwater harvesting structure that they have built for their home can store up to 25,000 litres of water. They use coal and sand to purify this water, and when they got it tested, it was found that it is potable quality water- right pH, no toxicity, and had the perfect TDS.

That got her interested in promoting rainwater harvesting in the city, but what steered her towards various conservation projects was attending the TEDX Salon event in 2016 at the Gandipet Lake which discussed the stark situation around the necessity of water conservation and severely depleting ground water levels. This lake was sufficient for the entire Hyderabad city in the 1920s, and when the event took place, the lakebed was completely dry. “For me, that was the tipping point. I knew water conservation would be my main goal from then on,” stated Kalpana who has been living tanker-free for 9 years now.

Kalpana Ramesh, turned water conservation champion, is driving the ‘Live the Lakes’ initiative with SAHE in Hyderabad. The programme is to create awareness about the importance of lakes, increase civic responsibility and return the lakes to its former glory. “We took the 8-acre Kudikunta lake for restoration as it was a dead lake, and I thought if we could show some change here, it would encourage people to work towards their water bodies. We have done a pilot restoration of the lake and I spent almost nine months in building a lake protection community that would be a part of this restoration. We started work by doing several rounds of clean up. There was indiscriminate dumping of fish, chicken and vegetable waste in the region, which we put an end to. We have performed more than 32 clean- ups and gotten rid of more than 110 tonnes of plastic waste from the lake area,” stated Kalpana whose commitment to exemplary practice demonstrates a unique ability to link her profession and passion towards water and environmental conservation.

She further added, “The next issue we tackled was sewage water. I had to get hold of old city maps to locate manholes to clean up these lines. In some cases, roads were built over these manholes, which meant we had to break the road. We also set up a small paddle aeration system on a floating island which is connected to a solar panel. This aerates the lake water. Changes in the water quality resulted in increased biodiversity and we soon found fishes in the water and the presence of migratory birds in the region. Our aim is to use phytoremediation to purify the water.”

The Save the Lakes initiative has 62 lakes around the IT cluster area of Hyderabad in its target. Also, to stay as an inspiration for all the 182 lakes in Hyderabad struggling to survive through communities. With the motto 'without any conflicts', Kalpana and team SAHE have created individualised strategies for each lake.

Kalpana who is a part of the National water mission is spear-heading it all the way with a community, Government and NGO model as a three-part sustainable plan. The first ever Lake Protection Committee formed for an independent lake for the City of Hyderabad is the first big milestone achieved in real terms for Kalpana Ramesh and SAHE to have brought together Communities, Govt and Ngo on one single platform to co-collaborate and work for water and the lake restoration.

Another conservation project of hers is ‘Driving the Save10KBores’ initiative which worked to revive defunct borewells using rainwater and urging communities to look at deep aquifers recharge. Between the months of May 2016 to July 2016 alone, right before the start of the monsoons, she got more than 200 families to revive their defunct borewells through a simple DIY schematic system.

Her initiative ‘Rainwater Project’ was recognized by Ink@wash, a platform encouraging innovation in waste management and water conservation/sanitation. The idea behind this initiative is to set up scientifically validated rainwater harvesting structures and provide maintenance services as well. “Think of this like an Urban Clap service for rainwater harvesting. We are also in touch with builders, so we can add water harvesting structures to upcoming and ongoing projects in the early stages of construction,” said Kalpana who is a designer by profession.

Throwing light on the initiative ‘Rainwater Project’, she said, “The other approach that we are looking at is involving school students. Students will be encouraged to come up with conservation ideas, some of which we will hone and implement. We would like to involve restaurants, theatres, colleges and schools in our water harvesting efforts, working in a block-wise manner through the city.”

“If awareness is one thing, the awareness to do it right is another thing. 85% of the rainwater harvesting pits in our city do not work because of poor maintenance. The soil needs to be checked and the ground strata needs to be understood. Rainwater harvesting structures are often made because people want to tick the box. My request to the urban dwellers is to pay attention to these structures. Build them the right way and make sure they are maintained,” she concluded.