“We need to build ideas for how India can have affordable growth that is sustainable”: Sunita Narain 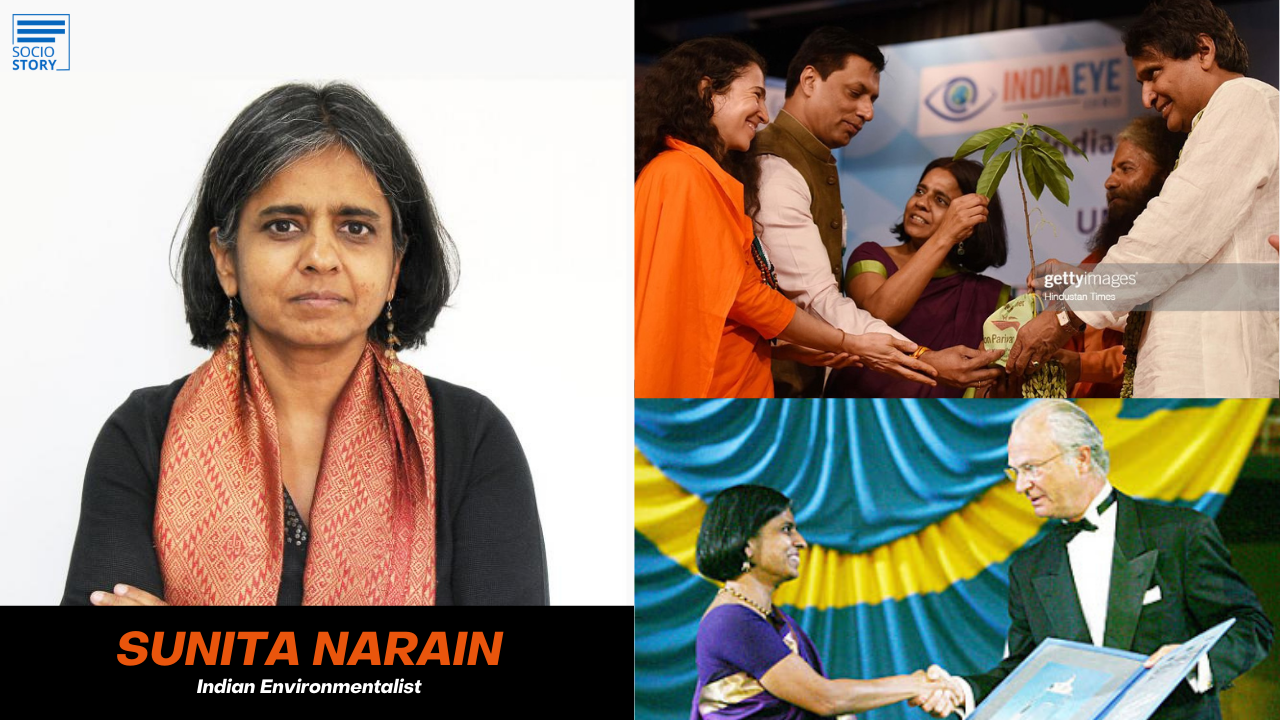 Sunita was born in 1961 and grew up in a privileged world, in her grandfather Sri Krishna’s house where she was always surrounded with books as he was an eminent journalist. Both he and her mother Usha Narain, also loved plants and gardening and so the house, located in New Delhi’s busy Jantar Mantar area, was filled with plants. Sunita was only eight years old when her father, Raj Narain, passed away while on a business trip to Europe. Her father was a freedom fighter who had established a handicrafts export business after India’s independence. After his passing, her mother was left to raise the four daughters on her own. Against many odds, her mother took up her father’s work. For many years, she provided her daughters with the best education and everything else that makes life delightful.

Reminiscing about the days gone by Sunita, the eldest of the four, said, “Today when people ask me about how I face difficult situations in work, I think only of the challenges and strength it took my mother to bring up the four of us. She gives me the inspiration to do much more with my own life – it would be nothing less than a disservice to her life to do anything less. When I think back, I realize that my own desire to work to protect the natural and lived environment and to use knowledge as a tool to bring change came naturally to me”.

Talking about how she got involved in the environment issue, Sunita Narain said, “I was passing out of high school in early 1980. Environment was hardly an issue of any public concern. It was certainly not a profession that my friends thought of joining. This was also the time when environmental issues had reached the global arena. In 1972, the World Conference on Environment was held in Stockholm. India’s then Prime Minister, Indira Gandhi, was one of the few developing world leaders who attended it. It was also in the 1970s, that news had come of the movement in the remote Himalayas where women had hugged trees to protect them from woodcutters. The ‘Chipko’ movement, as it was known, brought consciousness of how the environment was important for the very poor. This is how my work in environmental issues began”.

While in school, Sunita Narain happened to go to a conference being held at the Gandhi Peace Foundation in Delhi to discuss this movement. There she met two other fellow students from different Delhi schools who had similar interests. They joined hands to form a student organization in the field of environment, called Kalpvriksh – the tree of life. Their work together took them to visit the women of Chipko. As they travelled through the Himalayas, Sunita began to see the connection between livelihoods and environment.

A few years later, Sunita met Anil Agarwal, who had just founded the Centre for Science and Environment (CSE) and was beginning to work on an ambitious project called the State of India’s Environment (SOE). Sunita began working with Anil. The connections she had made in the Himalayas helped her realise – the environment was about development. For millions in India, the environment was not a luxury – a matter to worry about after they were prosperous. The environment was about survival. People depended on the environment – land, water and forests – and without this poverty was exacerbated. Sunita learnt that rejuvenating the natural asset was the way for economic growth. This gave her the reason she needed to pursue this work. It was the way forward for India’s economic growth.

“Those early years with Anil taught me a lot. He wanted to understand how this natural regeneration could take place. So we travelled to the villages where communities had come together to build a green future. There I saw the difference that good management of forest and water could make to people’s lives. Anil and I quickly learnt to look beyond trees, at ways to deepen democracy, so these commons (in India, forests are mostly owned by government agencies, but it is the poor who use them) could be regenerated. It became clear that without community participation, planting trees was not possible. For people to be involved, the rules for engagement had to be respected. To be respected, the rules had to be fair. This initiation helped Sunita to understand the challenges of climate change as well.”

In January 2001, Anil lost the long battle to cancer. Sunita had already taken over the running of CSE a few years ago. But the task ahead was formidable. How would she sustain the high-quality work of the organization without him? It seemed impossible. But she learnt quickly to draw upon the ideas, perspectives and courage that he had instilled in her. Sunita’s task was also easier because colleagues, who had worked with Anil and were steeped in his values, stayed on at the organization. Most importantly her mother was there for support and guidance.

Sunita recollects, “We pushed and prodded for change. Our campaign for the right to clean air reached a peak in 2002 as our demand for transition to Compressed Natural Gas (CNG) was accepted. All public transport buses and three-wheelers in the city moved to CNG, which brought down pollution. People in Delhi could see the stars again. Health indicators improved. Now we are asking for second-generation reform so that the city invests in public transport, walking and cycling. This will be our tryst with environment and health security. Similarly, work on community-based water management strategies in rural India and for a new paradigm for sewage management in urban India has taken shape, captured policy space and is now moving to practice”.

Sunita believes India has a huge challenge to reinvent the way in which it will manage growth, so that it is both inclusive and sustainable, in the future. India cannot afford the high-cost way of the already industrialized world to clean up the environment. These countries had the money to invest in cleaning and they did. But because they never looked for big solutions, they always stayed behind the problem—local air pollution is still a problem in most western cities, even if the air is not as black as in India. It is just that the toxin is smaller, more difficult to find or to smell. India wants to emulate the already rich and their disastrous ways, with much lesser resources and much more inequity and poverty. “The fact is we cannot find answers in the same half solutions they invested in. This is our challenge. We can do things differently to reinvent growth without pollution. But only if we have the courage to think differently. I hope we will,” asserts Sunita.

The world has been arguing and negotiating endlessly on ways and means to control the climate change crisis that it is faced with. Some success has been achieved, but the progress has largely been very slow and tardy. Sunita further said, “And I hope the children and the youth of the world will lend their voice to this burning issue, in whichever way they can. What else, as young human beings, can we do? It is clear that humans exert a massive impact on the environment. What we do and how we do it make a crucial difference. This is why the first task of being the change is to become aware of what we do. It is only then that we can transform our ways and begin to ‘tread lightly on Earth’.”

“Resources are limited; we must balance our growth to ensure these resources are there for many generations. This can only be done if our future generations are more conscious about their choices and have the concept of sustainable living rooted deep within. We must live the change,” concluded Sunita.