With indomitable spirit and confidence, specially-abled children proved that nothing can deter their aim in life 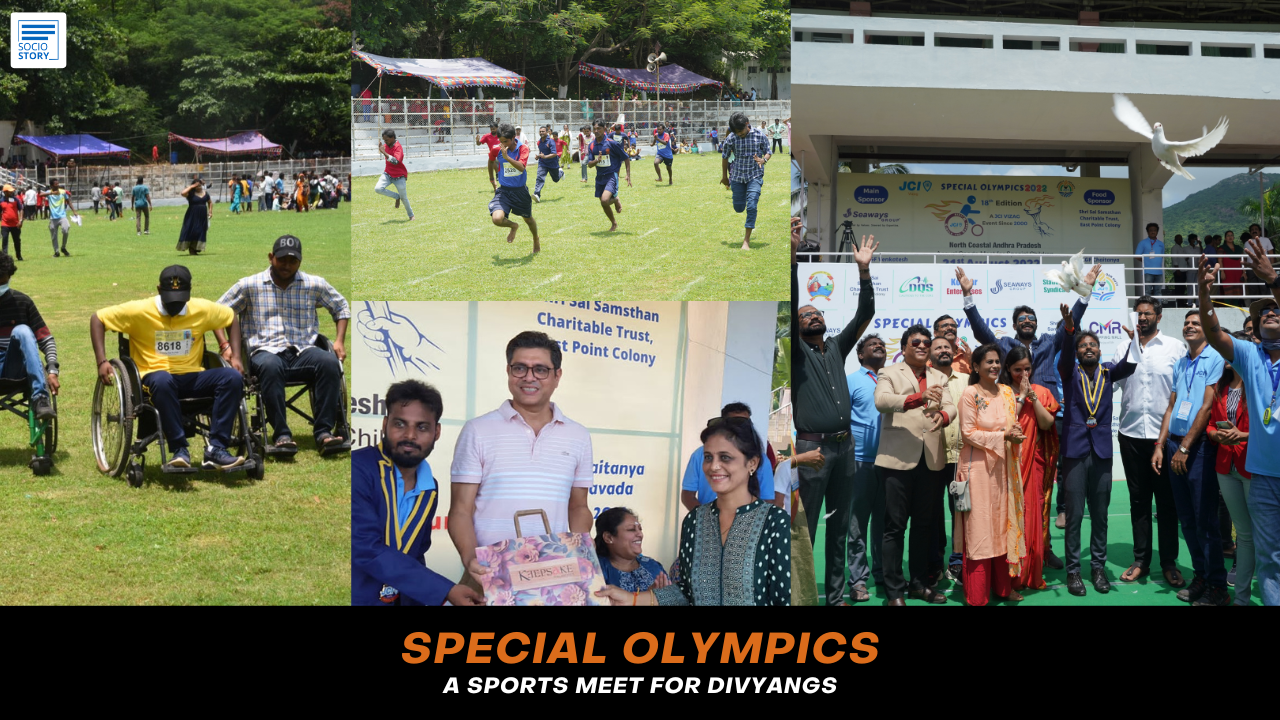 While serpentine queues were seen at the registration counter, children were all excited to participate in the Special Olympics- annual sports meet for the specially-abled children. While a few children were seen communicating in sign language, the others on wheelchairs were assisted by volunteers. Some were blind, some deaf and mute, some physically disabled and some mentally retarded. But one thing that was common was that they all were brimming with joy and enthusiasm, perhaps on a hot sultry day.

The sports meet was declared open by the DRM of Waltair Division, Anup Kumar Satpathy who was the Chief Guest. President of GITAM University M Sribharat was the Distinguished Guest on the occasion. JC Jeevan Jyothi Volla (ZVP- Region B) was the Guest of Honour and MD of Ora Motors Krishnakanth was the special invitee for the inauguration of the sports meet organised at Diamond Jubilee Port Stadium, here on August 21 (Sunday). All the dignitaries appreciated the cause for these special children and extended their support.

More than 60 categories of sports events for children were organised in the age groups of 8-12, 12-20 and above 20 years. Children with visual and hearing impairments, physically handicapped and mentally retarded students participated with great zeal and enthusiasm. A few of the sports categories include 50m and 100m running, shot put, Javelin throw, wheelchair race, disc throw, soft ball among the others. Breakfast, lunch and snacks were given to all the children, escorts, parents and coaches.

GVMC commissioner Dr G Lakshmisha was the Chief Guest for the valedictory function of Special Olympics which witnessed amazing cultural performances by the special children. Capt Siddharth Shukla, Vice-President of Seaways group was the Guest of Honour on the occasion. The special invitees were specially-abled people from Vizag who are an inspiration; Sai Padma, a polio survivor and Founder-President of Global AID, B Pragnanand, Food innovator and social entrepreneur, Dilip Patro, Founder of The Ability people and Kavya Purnima, a young woman with late visual impairment were present on the occasion. Medals were given away to the winners and participation certificates were distributed to all the participants.

“It was a special day to have witnessed an event of this scale. The grit and expertise these participants demonstrated and the fairness and right values in which they competed was commendable,” stated Shukla and congratulated the JCI team, students, parents, teachers, coaches and volunteers.

Stating that all children are special but some children are more special, the founder of Special Olympics, Prakash Kochar said, "The rolling shield in the name of my younger brother Prem Kochar who lost his life in an accident was awarded to Association Saikorian campus challenge, Vizianagaram”. Kochar further added, "Time and again, we have seen both men and women from India making a mark in the field of sports across the globe. We have also seen parasports gaining a lot of importance in India and the world. The need of the hour is to encourage interested children irrespective of their disabilities to take up sports and extend support to encourage them."

A group of Amateur radio operators (Dolphin Amateur Radio Repeater Club) was setup for Radio Communication in case of emergency services for children on ground. Band performance was by Kendriya Vidyalaya waltair and also a few Scouts from KV volunteered for the cause. The food sponsor was Shri Sai Samsthan Charitable Trust.